Major municipalities across the region are sending a clear message to the Missouri Legislature that they strongly believe that pending right-to-work/Freedom to Work/Workplace Freedom bills are WRONG for Missouri.

Passing official resolutions against this relentless attack on Missouri’s working families are St. Louis County, the City of St. Louis, City of O’Fallon and City of St. Peters. More are anticipated.

The latest group to take action is the St. Louis County Council, which passed a strong resolution condemning “…policies that undercut the success of working families and threaten the stability of the middle class do not result in enhanced economic development and, in fact, lead to long-term erosion of economic vitality as well as the degradation of the social fabric of the community…”

Introduced by Councilmen Steve Stenger, Mike O’Mara (member, Plumbers & Pipefitters Local 562) and Pat Dolan (president, Sprinkler Fitters Local 268), the resolution makes it clear that there is no reason to “… pander to out-of-state corporate special interests by adopting so-called ‘right-to-work’ policies that are demonstrably unsuccessful as an economic development tool and contrary to the public well-being.” 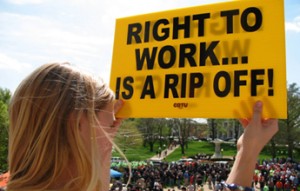 Howell, a member of Plumbers and Pipefitters Local 562 said he felt it was appropriate for the city of O’Fallon to take a stand on this issue because it would have devastating effects not only on working families, but on residents’ spending power, tax bases and numerous other areas.

“As the third largest city in the state, I think it is right for the city of O’Fallon to stand up against any legislation that would harm working families,” Howell said. “Everyone on the Council was onboard, and the resolution unanimously passed.”

The O’Fallon resolution states: “There is no reason why the Missouri General Assembly should overturn decades of successful labor-management practice, jeopardize the success and stability of working class families and the American middle class, ignore the will of the people as expressed in the previous state-wide referendum on adoption of “right to work” regulations …”

In the resolution Howell went on to state that “numerous studies have demonstrated, and our own experience and common sense have confirmed that central location, good transportation infrastructure, a skilled and stable work force, the value and availability of business incentives, reasonable tax rates, high caliber public services, and low energy costs are the most important factors influencing business relocation and economic development decisions.” 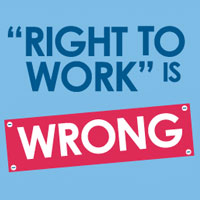 The City of St. Louis Board of Aldermen voted unanimously Feb. 28 to oppose bills that would prohibit labor contracts from requiring all employees to pay union dues or a “fair share” fee or require unions to get annual rather than one-time written authorization to collect fees that are automatically deducted from a worker’s paycheck (Paycheck Deception). By federal law, a union must represent every worker covered by a union contract, non-members included.

The St. Louis resolution says “right to work” proposals would “harm Missouri’s families and threaten the livelihoods of working men and women.”

In an interview with National Public Radio, Ward 16 Alderwoman Donna Barringer equated such restrictions to how her uncles were treated in the 1930s.

St. Louis Alderman Craig Schmid said voters should be wary if lawmakers approve the bills, as both deceptive measures could go to a statewide ballot later this year.

The St. Peters Board of Aldermen unanimously supported a resolution opposing anti-worker legislation at a recent Council meeting.

The municipalities, the St. Louis Board of Aldermen and St. Louis County Council stood up against anti-worker legislation because, they say, “it’s the right thing to do.”

A new report by Dr. Michael Kelsay, an economics professor at the University of Missouri-Kansas City, demonstrates that Missouri would lose between $4.8 billion and $6.28 billion annually in wages and tax revenue by becoming a right-to-work state.

In addition, Kelsay found that right-to-work states had a higher percentage of their population living below the poverty line and lower per capita GDP growth in 2012 than non-RTW states.