The Teamsters gave Santa a lot of help this year!

More than 10,000 needy families and their children and dozens of children who had to be in the hospital over the holidays had a brighter Christmas this past season as a result of the generosity and hearts of Teamsters throughout the region, all members of Teamsters Joint Council 13.

In three separate programs supported by the Teamsters, food and toys were provided to the less fortunate and the working poor, which in itself show that our economy has not yet rebounded to where it needs to be.

For the 14th year, 40 Teamsters volunteered their time and talents to first, pick up donated food from benefactors in Ohio, Arkansas, Joplin and St. Louis and then begin the task of creating specific food and toy packages for families who had pre-registered, said Teamsters Mike Koeller, who services as a pastor at the Leap of Faith Church in Maryland Heights.

“The pre-registration allows us to tailor food and toy packages for each family to make sure no child goes without toys and every family has enough food for Christmas,” Koeller added, a strong, proud smile in his voice.

Gieson operates a major food pantry and homeless shelter in Bridgeton through her Ministries of Love. Each year she sponsors the Joan Gieson Family Christmas. According to a story in the St. Louis Post-Dispatch, over the years this concerned homemaker’s program has fed and provided toys to millions of people.

• H.E.R.O.E.S CARE – Teamsters Joint Council 13 members helped to collect and distribute several thousand surplus toys to homeless and battered women’s shelters to make sure their children had a joyful Christmas.

“With salaries often less than $30,000 a year, military families have financial problems too, especially if the husband or wife is deployed overseas or a returning hero comes home with medical and/or mental issues after fighting in a war,” he added. 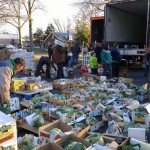 Gillespie is a member of the H.E.R.O.E.S CARE board. When it was evident the St. Louis area program collected more toys than was needed, they turned to him for help in putting them to good use.

“Kids in homeless and battered women’s shelters and even homeless hotels don’t have anything. We want to help bring some cheer into their lives,” he added.

• Snowflake Village at Children’s Hospital – On Christmas eve, Teamsters Joint Council 13 volunteers, families and members of other unions came together to wrap presents for children in the hospital over the Christmas holidays.

The Snowflake Village program lets parents with kids in the hospital who can’t afford toys, pick out toys for their children to help make their stay a little brighter, said Marvin Kropp, Joint Council 13 president.

The Council donated $14,975 from its annual Dan McKay Memorial Bass Tournament to the program to buy toys. Then they helped wrap and label the gifts so that their parents could deliver them on Christmas.

This is the second year for the union’s participating. This year’s donation was the largest Children’s Hospital has ever received for this effort.

Supporting the effort with trucks were USF Holland Motors and Antler Trucking and with trucks and warehouse storage, Eagle Drayage and Warehouse.