Washington, D.C. – Labor and political leaders were quick to condemn last week’s deadly assault on the U.S. Capitol by pro-Trump extremists on Jan. 6 – an event encouraged and incited by defeated President Donald Trump as he continued to push his false and dangerous narrative of election fraud in the Nov. 3 election, in which he was defeated by Democrat and President-elect Joe Biden.

“We are witnessing one of the greatest assaults on our democracy since the Civil War,” Richard Trumka, president of the AFL-CIO, said from the national LaborFederation’s office in Washington.

“Today’s attempted coup has been years in the making as Donald Trump consistently spews venom, conspiracies, hate and lies to his supporters. They are carrying out his wishes, and far too many Republican lawmakers have enabled and even encouraged this violent threat to our republic,” Trumka said.

“Emboldened by an Electoral College system that creates an avenue for insurrection instead of simply certifying the candidate with the most votes, this is an effort to violate the constitutional rights of every law-abiding American and the Labor Movement will not stand for it. Not today. Not ever.”

Five people – a Capitol police officer, and a protestor who was shot and three who suffered “medical emergencies” – died in the confrontation at the Capitol.

The Defense Department has belatedly activated roughly 6,200 National Guard troops to help support the Capitol Police and other law enforcement in Washington through Inauguration Day on Jan. 20, when Biden will be sworn-in to office.

DESPERATE ATTEMPT TO CLING TO POWER
Everett Kelley, president of the American Federation of Government Employees (AFGE), the largest union representing 700,000 federal employees, issued the following statement on the anti-democracy riot and breech of the U.S. Capitol building:

“In a shocking scene watched by Americans across the nation, the President of the United States encouraged a mob of anti-democracy protestors to breach the security perimeter of the U.S. Capitol, forcing a lockdown, and endangering the safety of members of Congress, workers at the Capitol, innocent civilians who live nearby, and the law enforcement officials charged with keeping the peace.

“It is nothing short of a desperate attempt to use violence to cling onto power after a clear defeat at the ballot box.

“…the people have spoken. Joe Biden will be our next president and Kamala Harris our next vice president. We will not surrender our democracy.”

ASSAULT ON OUR DEMOCRATIC SYSTEM
The International Brotherhood of Electrical Workers (IBEW) released a statement calling for Trump’s immediate resignation or removal from office. 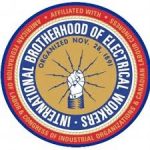 “Today’s attack on the U.S. Capitol by violent extremists represents a direct assault on our democratic system. Blame for this horrific event lies directly on the shoulders of President Trump and his enablers in Congress, who have deliberately spread disinformation about the validity of the 2020 election, threatened our constitutional system by disregarding the will of America’s voters and promoted an atmosphere of violence that led to what happened today.

“For too long, Trump’s extremist rhetoric, venomous attacks and deranged conspiracy theories have undermined America’s faith in democracy, divided Americans against each other and poisoned political debate in this nation.

“It’s clear that one more day of Trump in office represents a direct threat to the health of our republic, and we demand his immediate resignation. If Trump does not resign, we call on Vice President Mike Pence and members of the cabinet to invoke the 25th Amendment to remove him.

“We also condemn the efforts of some Republican lawmakers to overturn the will of the American people by refusing to certify the results of the Electoral College. This represents an unprecedented effort to invalidate a democratic election. Any member of Congress who attempts to thwart the will of the American people as expressed in a democratically held presidential election has no place in the people’s house.”

“What was supposed to be a routine procedure to follow the Constitution and certify the democratically decided election turned into a violent siege on the U.S. Capitol and the foundations of our democracy,” Costa said. “While our nation was founded on freedom of speech and the right to have a voice, this was not an exercise of those rights. We condemn those turning to violence and mob rule. We will not stand for this unprecedented and heinous assault on our democratic principles.”

AFT President Randi Weingarten, a New York City civics teacher, tweeted:  “#Trump has enabled rioters who stormed the U.S. Capitol & threatened the lives of duly elected officials. It is domestic terrorism. It is reprehensible. It will not stop the peaceful transfer of power, but there must be #accountability 4 this criminal behavior. #Defend Democracy”

National Nurses United Executive Director Bonnie Castillo called the riot “the inevitable result of what President Trump has inspired and incited for years, from encouraging attacks on protesters at his rallies and on officials ordering safety measures in response to the pandemic, to embracing armed white supremacists, to the constant demonization, in the starkest of terms, of his political opponents.

“All of that has escalated in the weeks leading to the election, and especially after the November vote when the president has denounced the legitimacy of a democratic election, promoted outlandish conspiracy theories, and urged his armed supporters to act to ‘save this country.’” Castillo said.

“The president has been encouraging sedition. No one is above the law. He is responsible… and he should be held accountable.”

As a mob broke into the U.S. Capitol on Jan. 6, forcing lawmakers, staff and Capitol press to flee government buildings or seek shelter while Trump supporters damaged property and fought with law enforcement, newly sworn-in Rep. Cori Bush called for the expulsion of House Republicans who publicly sought to discredit the election results.

Bush, in a tweet Wednesday afternoon, published a draft resolution calling on the House Ethics Committee to investigate whether the Republican lawmakers violated their oath to uphold the U.S. House Constitution by publicly objecting to a routine certification of official results from the November elections.

The violence at the Capitol followed months of repeated false claims of election fraud by Trump, and public statements by Republican lawmakers including U.S. Sen. Josh Hawley of Missouri, that they planned to object to a routine vote by Congress to certify Electoral College votes affirming Biden’s win.

“I believe the Republican members of Congress who have incited this domestic terror attack through their attempts to overturn the election must face consequences,” Bush said in a tweet. “They have broken their sacred Oath of Office. I will be introducing a resolution calling for their expulsion.”

‘TIN-POT DICTATOR’
“Let me be clear,” Senator Tammy Duckworth (D-Illinois) tweeted, “this will still end with Joe Biden being sworn in as President of the United States on January 20th. A mob of people following a wannabe tin-pot dictator with a fragile ego will not win, democracy will.”

‘TIME TO END THIS NIGHTMARE’
Rep. Adam Kinzinger (R-Illinois) joined at least three other Republican members of Congress calling for Trump to be removed from office.

“It’s time to invoke the 25th Amendment and end this nightmare,” Kinzinger said in a video he published online.

Two other Republican officeholders joined Senate Democratic leader Chuck Schumer calling for Trump to be impeached – a move that, even at this late stage of his term, if passed, would allow the Senate to vote to disqualify him from ever holding federal office again.