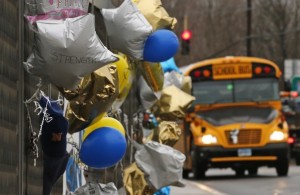 Twenty children and six adults were shot and killed at Sandy Hook in one of the worst school shootings in history.

“Our duty to every child is to provide safe and secure public schools. That is the vow we take as educators. It is both astounding and disturbing that following this tragedy politicians and pundits have taken to the airwaves to call for arming our teachers,” Roekel and Weingarten said in a joint press release.

“As the rest of the country debates how to keep guns out of schools, some are actually proposing bringing more guns in, turning our educators into objects of fear and increasing the danger in our schools.”

In Missouri,State Rep. Mike Kelley (R-Lamar) pre-filed a bill last week that would allow any public school teacher or administrator with a concealed-weapon permit to carry guns in schools. The legislation and has 24 co-sponsors, including House Speaker Tim Jones (R-Eureka) and House Majority Leader John Diehl (R-Town and Country).

St. Louis County Prosecutor Robert McCulloch has said his office would oppose any legislation allowing anyone other than a trained and licensed officer to be armed in schools.

NO PLACE IN SCHOOLS

“Guns have no place in our schools. Period,” Roekel and Weingarten said. “We must do everything we can to reduce the possibility of any gunfire in schools, and concentrate on ways to keep all guns off school property and ensure the safety of children and school employees.

“This is not just about guns. Long-term and sustainable school safety also requires a commitment to preventive measures. We must continue to do more to prevent bullying in our schools. And we must dramatically expand our investment in mental health services. Proper diagnosis can and often starts in our schools, yet we continue to cut funding for school counselors, school social workers, and school psychologists.”

States have cut at least $4.35 billion in public mental health spending from 2009 to 2012, according to the National Association of State Mental Health Program Directors.

“It is well past time to reverse this trend and ensure that these services are available and accessible to those who need our support,” Roekel and Weingarten said.

“Greater access to mental health services, bullying prevention, and meaningful action on gun control—this is where we need to focus our efforts, not on staggeringly misguided ideas about filling our schools with firearms. Lawmakers at every level of government should dismiss this dangerous idea and instead focus on measures that will create the safe and supportive learning environments our children deserve.”