Home Obituaries Bob Kelley, one of our community’s truly great leaders: a legacy of... 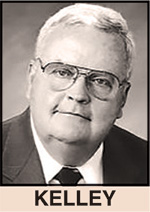 Bob Kelley, my life-long friend, mentor, teacher, confidant, a larger-than-life, no nonsense but highly practical, highly respected Labor leader with a heart of gold, one of the finest and most courageous leaders in the St. Louis Labor Movement ever, a man who lead workers to victory in so many battles yet constantly preached Labor/management cooperation, died Oct. 27 at the age of 75 from heart failure complicated by several other medical issues.

A 44-year member of United Food & Commercial Workers Local 655, the largest retail union in Missouri, he began his career in 1960 as a part-time bagger at Rapps Supermarkets.

In 1966, Local 655 hired him as a field organizer; in 1970 he was elected the local’s first recording secretary to fill a new position created by the International Union’s convention; in 1969 appointed Director of Organizing, a position he held until he left the union in 1975 after being elected secretary-treasurer of the Greater St. Louis Labor Council.

In 1978, Bob was elected the Labor Council’s president, retiring in 2004. However, for a period of 18 months before retiring, he was asked, and agreed to postpone his retirement and serve as Local 655’s president filling out the term of a retiring president while he continued his role as Labor Council president. He relinquished his Labor Council responsibilities to then Secretary-Treasurer Robert Soutier. This dual role expressed the confidence and trust his union members had in this special leader.

During his time with Local 655, he organized the local’s first Political Action Committee, ELECT, served as their Jefferson City lobbyist and pioneered one of the nation’s first direct-mail organizing campaigns that successfully organized a chain of convenience stores spread over a 100-mile radius (then considered an impossible task).

As Local 655’s president, Bob led, and won, a 25-day strike against the three major union food chains to win a fair contract for his members. It was the first union’s first strike in the local food industry.

To drive home the close relationship between the union’s members working in the stores to their customers in order to gain support of the picket lines, he coined a new phrase for the union: “Your Neighborhood Union,” a phrase copied by many UFCW locals across the country and used for years until an overriding statement was coined by the UFCW International Union some years later.

A LEGACY OF ACCOMPLISHMENTS

Bob established a legacy of singular accomplishments during his Labor career, not only with and for his union and the Labor Movement, but also for union families and the St. Louis community-at-large. Among those accomplishments:

• He played a pivotal role in the 1978 defeat of the so-called “right-to-work (for less)” amendment to the Missouri Constitution. Serving as a member of the United Labor Committee of Missouri, the statewide committee organizing the “NO” campaign, Bob became one of Labor’s most vocal spokesmen, appearing regularly on radio and television and at meetings to provide a voice for Missouri’s union members against this union-busting law.

• He worked behind-the-scenes to help in dozens of other negotiations between affiliated unions and their employers.

• Many years ago, when an agreement between then TWA and its 4,000 machinists threatened to destroy the airline, Bob teamed up with then St. Louis Mayor Vincent Schoemehl and Congressman Richard Gephardt to orchestrate an effort in Washington and St. Louis that brought everyone back to the bargaining table to hammer out an agreement that not only averted a strike, but was credited for keeping the airline in business.

• He was quietly involved in organizing financial and political support both from the unions and the City of St. Louis for the city’s first new convention center hotel, the Renaissance Grand Hotel (now the Marriott St. Louis Grand), a deal that was “near death” dozens of times.

• He played a pivotal role in the last two major expansion of the St. Louis Convention Center. In the first expansion, he was Labor Chairman for that initial expansion effort; during the second expansion, he worked with business, Labor and minority community leaders to resolve critical minority participation issue that threatened to stall the expansion.

• Was vice chairman of the SPIRIT of St. Louis Labor/Management Committee, which helped form to promote Labor-management harmony in our region,

• Served as a Democratic National Committeeman from Missouri from 1984-1992. He was part of the Missouri delegation to the presidential convention in 1992 that nominated then-Arkansas Gov. Bill Clinton.

• Served a member of the Executive Board of the Missouri AFL-CIO.

• Was a member of the national AFL-CIO’s Advisory Committee for State and Local Central Bodies.

• In 1992, when Eastern Europe was emerging from Communist domination, he traveled to Hungary on behalf of the National AFL-CIO to teach union organizing and administration to the emerging free trade unions there.

As busy as he was working for the Labor Movement, Bob made time to work in the community on behalf of Organized Labor. Among those efforts:

• Was a member of the St. Louis Convention and Visitors Commission, the St. Louis Economic Development Council, the United Way of Greater St. Louis’ Board of Directors (and on its Administrative Budget Committee and Executive Board), and the University of Missouri’s Labor Education Advisory Committee.

A mass and burial service were held earlier this week. The family has requested that in lieu of flowers, donations be made to the St. Charles Borromeo Catholic Parish (601 N 4th St, St Charles, MO 63301), or the St. Louis Labor Council’s “$5 for the Fight Fund,” a program Bob founded in 1996 to provide emergency financial support to out-of-work union members and their families (3301 Hollenberg Dr., St. Louis, MO, 63044), of a charity of your choice.

Writing this obituary has been one of my most challenging efforts.

On behalf of the Labor Tribune staff, the entire Labor Movement he so valiantly served and loved, and the community he gave so much to, we express our condolences to the Kelley family.

May your Soul
Rest In Peace Bob.