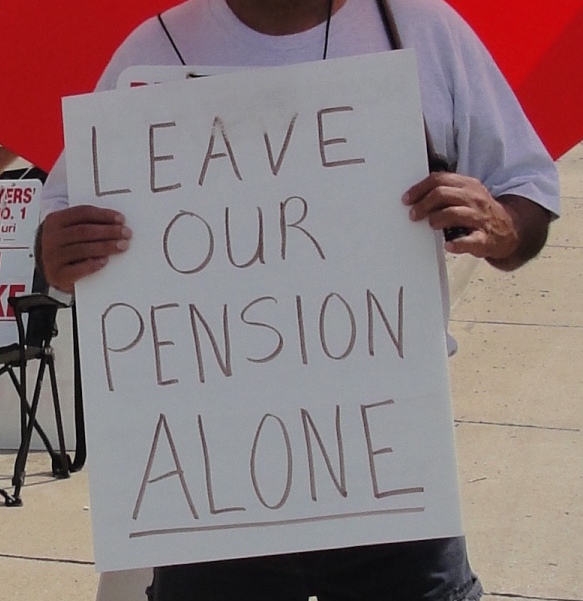 As the strike by Bricklayers Local 1 entered its fourth week, efforts intensified to find a resolution with PRIDE of St. Louis Executive Director Jim LaMantia assisting in the talks in addition to the Federal Mediation & Conciliation Service (FMCS)

However, after countless meetings between Local 1’s bargaining committee and representatives of the Mason Contractors Association (MCA), no progress was being reported. The critical issue is still the pension plan.

“We’d like to settle this soon, but not at the price of destroying our members’ pension plan,” said Local 1 Business Manager Don Brown. He pointed out that the MCA’s position is really indefensible since the union’s pension plan is fully funded and there are no withdrawal liabilities for MCA contractors.

The MCA pension fund trustees want to kill the current plan and install a 401(k) type plan while diverting members’ pension fund contributions into the old plan as some form of an “insurance” against any future withdrawal liabilities, if and when they ever might happen, an unlikely occurrence according to the Bricklayers’ pension consultant.

And support for the absolutely unreasonable and irrational position of MCA continues to erode with yet another major contractor — Denton Tuckpointing — resigning from the MCA and to become an independent contractor and signing a new agreement with Local 1.

Last week, two other major contractors did the same: Superior Waterproofing and Restoration and B&K Tuckpointing.

Additionally, McBride & Sons removed E.C. Landers, a struck MCA contractor, from its jobsites when they learned they had not signed a new bricklayer’s agreement.

To keep its more than 850 members on strike informed about the status of the negotiations, Local 1 has set up a website: www.bacstl.com, and has a Facebook page, Twitter account and texting service. See separate story adjoining.

Bricklayers Local 1 has launched an online campaign to better communicate with members and the general public on what the strike means and to provide updates on strike developments. Hundreds of members and union supporters have already signed-up to receive information on the ongoing strike.

Here are the ways YOU can sign up to get updates: