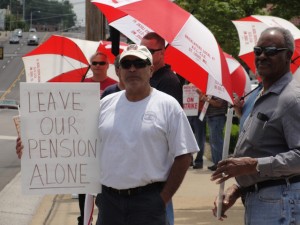 As the strike by Bricklayers Local 1 against the Mason Contractors Association entered it’s third day, Local 1 Business Manager Don Brown said the two sides continued to talk, but with no progress.

Eight-hundred-fifty members of Bricklayers Local 1 went on strike at midnight Sunday when their current four-year contract with the Masons Contractors Association (MCA) expired.

Despite negotiations over the past several weeks, the two sides have not been able to come to an agreement on a new contract, Brown said. 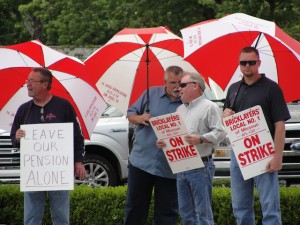 As for job site pickets, Bricklayers will only picket job sites where brickwork is underway, Brown said. Many contractors that are not members of the MCA have already signed a new contract with Local 1, Brown said, and work will continue on those projects.

“We have no desire to shut down the construction industry so there will be no blanket picketing of construction jobs,” Brown said. 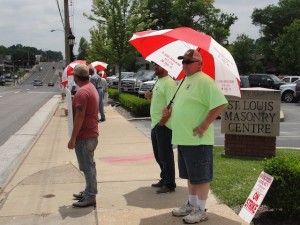 Some 850 bricklayers, tuck pointers, and caulkers and cleaners are employed by 95 local companies. Of that total, 42 companies are covered under a single agreement with the Mason Contractors Association and 53 are independent contractors that have similar basic agreements.

Details of the disagreement were not made public at this time.

“We don’t want to be negotiating in the press. We have differences that need to be resolved, and the Bricklayers are ready to try and resolve them at the bargaining table,” Brown said.