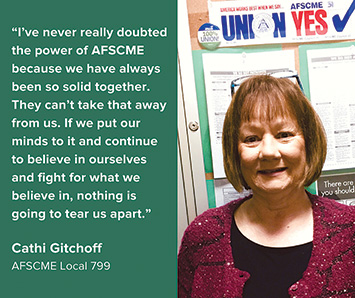 A living embodiment of selflessness and cooperation within the Labor Movement, Gitchoff, 66, of Granite City, also served as recording secretary of the Greater Madison County Federation of Labor. And she was much appreciated by both groups.

A member of Local 799 for 35 years and an activist for nearly as long, Sister Gitchoff helped lead Local 799’s 13-day strike in 2005. Over her years in the union, she also served as People Chair, chief steward, executive board member and vice president.

“Cathi was fiercely loyal and fervently dedicated to the union,” AFSCME Council 31 said in a statement on the union’s Facebook page. “There was no task she refused to take on, no challenge she would not tackle. She was selfless; it was never about promoting herself, always about standing up for her fellow union members. She will be greatly missed.”

Sister Gitchoff was born on Jan. 27, 1955 in Granite City, the daughter of Shirley (Morgan) Batson of Rosewood Heights and the late James Batson. She married Drew Gitchoff on Sept. 24, 1983 in Granite City and he survives.
She worked as a clerk in the Madison County states attorney’s office for more than 35 years and was considered a “true advocate for the people.”

NOTHING WILL TEAR US APART
Council 31 shared this statement from Gitchoff about the power of unions on its website:

I’ve never really doubted the power of AFSCME because we have always been so solid together. They can’t take that away from us. If we put our minds to it and continue to believe in ourselves and fight for what we believe in, nothing is going to tear us apart.

Federation President B. Dean Webb said Gitchoff, who served on the executive board and as recording secretary since 2016, will be hard to replace.

“I’m sort of at a loss for words,” Webb said. “Whatever we needed, there was no hemming or hawing, she just did it. You didn’t have to worry about Cathi. She was a doer. She’s going to be truly missed.

A FIERCE ADVOCATE
“Cathi Gitchoff cherished her children and grandchildren and will be remembered for the love and special times shared with her family and friends,” an obituary posted on Irwin Chapel Funeral Home’s website stated. “She was a fierce advocate for her friends and was always doing for others throughout her life.”

In addition to her mother and husband, she is survived by her daughter and son-in-law, Heather and Tim Manibusan, of Edwardsville; her son, Jon “Alex” Gitchoff, of St. Louis; two grandchildren, Noah and Ben Manibusan; two brothers and sisters-in-law, Paul and Wendy Batson, of Staunton, and Christopher and Cindy Batson, of Alton; a sister, Becky Hayes, of Rosewood Heights; a brother-in-law and sister-in-law, Milo and Cara Gitchoff, of Maine; and many nieces, nephews, extended family and cherished friends. She was preceded in death by her father and two brothers, Tim and Andy Batson.

Her family is planning a celebration of her life, to be scheduled, and has requested memorial contributions to Children’s Home and Aid, 2133 Johnson Road, Suite 104, Granite City, IL 62040.