Home Labor News From Our Region Collective bargaining for pension plans across America at stake in Bricklayers Local... 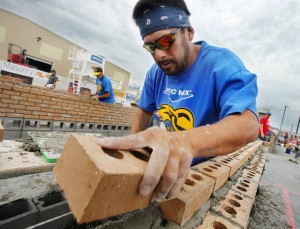 Contractors sue to arbitrate the pension plan’s termination; if successful, all pension plans everywhere ‘up for grabs’

Collective bargaining for pension plans across

America at stake in Bricklayers 1 pension disputefor unions across America.

The management trustees of the Bricklayers pension fund want to end the current defined benefit plan and replace it with a defined contribution plan. (See separate story on Page 14 for the difference in the two concepts.) That is not unusual in the pension world today.

CONSEQUENCES FOR
ALL UNIONS, EVERYWHERE

If a court rules in the management trustees’ favor, it will have major negative consequences for union benefit plans across this country.

If the (contractors) are permitted to undermine the collective bargaining process and obtain through arbitration what they cannot achieve through negotiations, this will almost certainly occur throughout the country, potentially negatively impacting the retirements of millions of workers in pension plans

The union’s position is straight­forward: what the contractor trust­ees seek would cause a termination of the Pension Fund under federal law. They make these points:

• Under the Pension Trust, the Pension Fund cannot be terminated without the ratification vote of the entire Local 1 membership.

• The contractor trustees’ pro­posal is unlawful because it would make the Pension Plan inconsis­tent with the collective bargaining agreement.

• Finally, the decision to termi­nate the Pension Fund should be reserved for collective bargaining.

The issue first surfaced last July in a trustee meeting, which has equal numbers of labor and man­agement representatives.

The contractor trustees proposed ending the current plan and freez­ing current benefit levels in place and launching an entirely new pension plan. The union trustees objected but the proposal was put to a vote where it failed in a tie.

‘NOT ON YOUR LIFE’

“Not on your life,” said Local 1 Business Manager Don Brown with pent up emotion.

“We’re not about to let one man – an arbitrator – make a decision that impacts the lives of hundreds of bricklayers and apprentices, now and into the future!”

• First, the overall amount of a proposed hourly wage increase is decided in collective bargaining.

• Then, Local 1’s executive board decides how the raise will be split between pension, health and wel­fare and the paycheck.

• Finally, once the union has de­cided how the money will be split between the check and the benefits, the pension trustees then determine how the amount allocated by the Executive Board will be spent.”

“The MCA wants to kill our cur­rent pension and replace it with a lesser plan, all in an effort to protect themselves against withdrawal li­ability,” Brown said. The MCA’s goal is to take away retirement security from bricklayers so that the contractors can be protected from withdrawal liability.

“They knew our members would never vote to castrate their own pen­sions, so they thought they could accomplish the same thing at the Pension Fund meeting. They were dead wrong. This is a backdoor effort to circumvent negotiating over this critical issue, an issue that belongs in negotiations, not a decision made by ten trustees, half of which stand to gain big time.”

The arrangement Brown refers to is the demand by the management trustees to take the current $4.60 an hour that goes to fund the pension and split it into two parts:

First, $1.38 would go into the current frozen plan for what Brown calls a “special insurance fund” exclusively to protect the contrac­tors. While this plan would be frozen with no future changes in member’s benefits, it would build up funds to protect contractors if, at some point in the distant future, the plan was underfunded requiring contractors to pony up more money.

The hypocrisy of the contractor argument is that the Bricklayers Pension Fund is 97.5 percent funded and has no unfunded liabilities now or for the foreseeable future. Few pension plans in the nation can make that claim.

“This may be needed to protect the contractors decades into the future, but hurts our members now and forever into that same future,” Brown added.

Second, the remaining $3.22 would go into a new 401(k) type plan. This type of plan guarantees no benefits at all but creates a pot of investment money in each per­son’s name that is controlled by the fund’s investment advisors. If the economy were to sour again, there could be substantial losses in the fund which means there will be less money available for a bricklayer’s retirement.

“In other words,” Brown said, “Our members take all the risk and the contractors none.”

This concept has terrible conse­quences for our members, Brown pointed out.

• For current members, $1.38 an hour would be siphoned off and paid into the current plan even though it’s being terminated/frozen for the rest of the bricklayer’s working life but would earn the bricklayer NO additional pension credits/benefits from the plan.

• For apprentices, except for first year apprentices that are not covered by the pension, they will be contributing $1.38 into the ter­minated/frozen plan their entire working life but never gain any pension credits/benefits from that contribution.

• A sour economy would mean less money available to bricklayers in the new plan when they are ready to retire since their money would be invested in stocks and bonds and subject to the whims of Wall Street and the stock market.

‘Defined’ vs. ‘contribution’ pension plans
could make a big difference at retirement

Bricklayers Local 1 is fending off an effort by its contractors to radically change their pension program by killing off the current defined benefit plan and replacing it with a defined contribution plan.

Here are the two big differences for workers:

• A defined benefit pension plan guarantees participants a specific level monthly dollar benefit deter­mined by their length of service upon retirement. This specific benefit is paid every month re­gardless of the plan’s investment performance.

• A defined contribution plan guarantees no level of monthly benefits. Instead, dollars are put into a 401(k) style plan in each par­ticipant’s name. The Trust Fund’s investment advisors then invest those funds. As a result of those investments, the individual’s ac­count could see solid growth OR it could see substantial losses, just like the stock market since most of the plan’s investments are in the stock market. Once the participant retires, they are entitled to the balance of money left in their individual account.

In other words, under a defined contribution plan, a member ap­proaching retirement could be forced to continue working, or take a significant financial hit, if the stock market takes a dramatic downturn close to their projected retirement date.