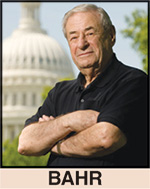 Morton Bahr, who led the Communications Workers of America during the most turbulent years of the communications industry and made the union a powerful force for working people, died on July 30, 2019, at age 93.

In 1951, Bahr took a job as a telegraph operator at Mackay Radio and Telegraph in New York. Not long after, he organized his fellow workers into an independent union that later affiliated with CWA. He worked his way up to a leadership position, becoming district director and then vice president of the union’s largest district, where he led CWA’s first organizing campaign in the public sector.

Bahr’s tireless efforts on behalf of working people led to his election as president of CWA in 1985, becoming only the third president in the union’s history. He would win re-election to the position and remained president for 20 years, during which he also became an AFL-CIO vice president and Executive Council member.

EXPANDING ORGANIZING, EMBRACING TECHNOLOGY
The year before he was elected, the AT&T Bell System was broken up and the shakeup meant the telecommunications industry was in turmoil. Bahr created new bargaining and campaign strategies to help workers survive the turbulent times. One major strategy was to expand beyond telecommunications to include high technology, media, the airline industry, electronics, manufacturing, public service and more.

Bahr became an expert on the nexus of technology and the workforce, and he championed groundbreaking education and training programs that would help transform the Labor Movement. His dedication to worker education will endure, as a scholarship in his name continues to help working people enhance career opportunities through distance learning.

Bahr worked with President Bill Clinton on the Commission for a Nation of Lifelong Learners, with his friend Massachusetts Senator Edward Kennedy on fixing the nation’s broken health care system, and with countless elected officials on ways to make life better for working people.

“This union has been my extended family,” Bahr said in his last CWA convention address in 2005. “Whether you’re a shop steward, a local union officer, a staff rep or an officer, virtually every day you have the ability to help change somebody’s life. We are united, we are family, we are union.”

“Morty was a brother, a friend and a first-class leader. All workers are better off for his service and solidarity. The best way to honor his legacy is to confront the challenges of our time, from inequality to technology, with poise, purpose and passion.”

Even after he retired in 2005, Bahr couldn’t give up the Labor Movement. He became a volunteer organizer dedicated to bringing collective bargaining rights to every Verizon Wireless worker in the country.

LASTING IMPACT
“Morty kept fighting for the Labor Movement long after he officially retired, and his work will have a lasting impact for decades to come,” said J. David Cox, national president of the American Federation of Government Employees. “Many AFGE members have advanced in their professional careers thanks to the online learning scholarship created in Morty’s name that continues to this day.

“Our thoughts and prayers go out to Morty’s beloved wife Florence and his entire family.”

Bahr is survived by his wife Florence, his son Dan and daughter Janice, four grandchildren and eight great grandchildren.

SCHOLARSHIP CONTRIBUTIONS
Memorial contributions may be made to the Morton Bahr Online Learning Scholarship at Empire State College.