Home Opinions ONE MAN’S VIEW: Dangerous short-term thinking could doom us all

A disturbing rumor about the Prop A (RTW) vote 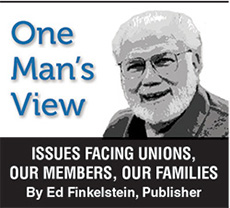 On Aug. 7, Missourians will vote on our future: Prop A, the so-called “right-to-work (for less)” measure.

While so many have worked hard to educate our members and the public about this terrible, anti-worker law, there’s a disturbing influence at work in our ranks that we need to address —  it’s serious and dangerous.

There’s been a rumble from some that their spouses are saying that if RTW passes, the family budget will benefit because of not having to pay union dues.

Some younger or less-engaged union members and spouses who have benefitted from their union-negotiated wages, health benefits and future pensions but have never had to fight for these benefits might be thinking the same way.

For workers who have never experienced a strike, never felt an empty belly, never had a budget so tight they couldn’t pay for something their kids need, it can be easy to take today’s wages and benefits for granted, to think they’ll always be there, so why not save on union dues, assuming their union wages and benefits will continue unchanged?

That kind of thinking either refuses to understand, or ignores a reality: it’s their dues/ fair share payment that keeps their union afloat, giving their union the ability to protect, fight for, and improve, their benefits. No organization can survive without the financial resources to do so. Thus, everything we have now, and hope to have in the future, will be up for grabs!

DO THE MATH: UNION DUES ARE WAGE INSURANCE
In RTW states, family incomes average $8,740 LESS a year. For those thinking of the family budget, that’s about $168 LESS a week, and approximately $728 LESS a month. Are you actually saving by not paying union dues?

Let’s do the math:

This is the annual difference in pay you’re AHEAD by paying your union dues and NOT having Prop A, which will reduce your family income by $8,740 year.

Union dues are really wage/job insurance. To protect your pay, Vote NO on Prop A. 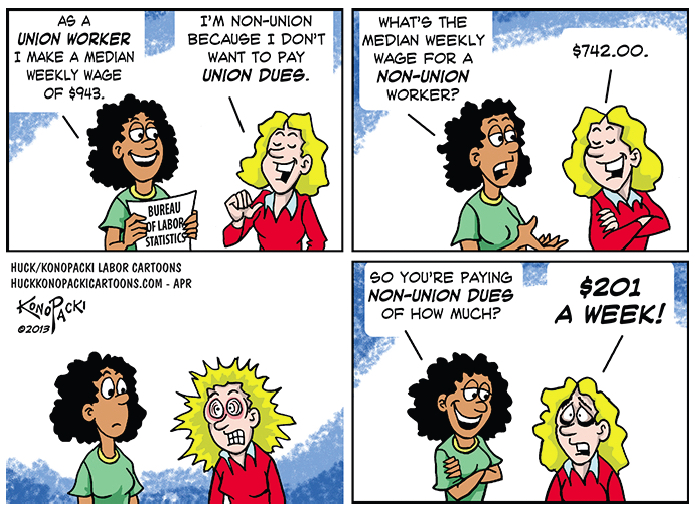 HAVE A SERIOUS DISCUSSION

If you know someone who is struggling with short-term thinking that they’re saving money by not paying their union dues, talk to them about the math. Unless we face this head-on before Aug. 7, we could be crying instead of celebrating on Aug. 8.

This is a plea for every union member to have a serious discussion with their spouse, their best friend, their family members and neighbors about the terrible loss Prop A will have on everyone’s paycheck –– union and non-union workers alike.

The Labor Tribune series “WHY Vote NO on Prop A,” has made it clear on 14 different issues: Prop A is bad for everyone. Make Prop A the topic of your conversations for the next 19 days. Voting for Prop A is like cutting your own throat.

We owe it to ourselves, our families and our future to defeat Prop A. Vote ‘NO’ on Aug. 7.