Home Labor News From Our Region Day of Action, Thursday, Sept. 22, to stop Humphreys, other ‘RTW’... 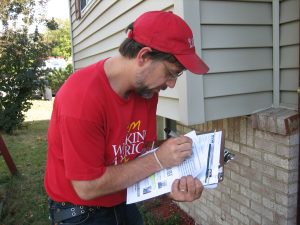 With anti-worker proponents of so-called “right-to-work” dumping millions into Missouri’s statewide and legislative campaigns, the Missouri AFL-CIO, Greater St. Louis Labor Council and St. Louis Building & Construction Trades Council, along with the South County and Rockwood Labor Clubs, are calling on all union members and working people to step up for a Day of Action canvass on Thursday, Sept. 22, as part of the Labor ’16 campaign

Members will meet at Genesis Banquet Center at 2651 Telegraph Road in south St. Louis County between 3-7 p.m. to get their canvasing assignments.

Members will be visiting the homes of fellow union members – in many cases their own neighbors – to canvass for Chris Koster for governor, Jason Kander for U.S. Senate and worker-friendly state House and Senate candidates in the Nov. 8 election.

“Reaching out to our neighbors and fellow union members is essential in this election,” said Mike Louis, president of the Missouri AFL-CIO. “Anti-worker forces are pouring millions of dollars into this campaign in an effort to turn Missouri into a so-called ‘right-to-work’ state. They are trying to buy this election. We can’t let that happen. Electing Chris Koster governor, Jason Kander senator, and a bi-partisan slate of state Senate and state House candidates that will fight for a better life for all Missourians is imperative.”

One of the biggest proponents of “right-to-work” in Missouri, Joplin businessman and union hater David Humphreys, owner of TAMKO Building Products, and his family have already spent millions supporting challengers to Republicans who voted “No” on last year’s “right-to-work” legislation, including dumping nearly $3 million into a political action committee called the “Committee for Accountable Government.”

His efforts defeated two incumbent House Republicans in the primary election and helped his preferred candidates in the Missouri Senate emerge victorious.

With his sights now set on the November election, Humphreys has already doled out $2.3 million to various candidates, including a $1 million check to the Committee for Accountable Government.

STEP UP FOR WORKING FAMILIES

Humphreys is just the most glaring example of corporate CEOs and special interests trying to buy this election and impose so-called “right-to-work” in Missouri.

Corporate CEOs and special interests are attacking from all sides. The Day of Action canvass is a chance to fight back.

“With so much at stake, we all need to step up to make a difference,” said St. Louis Labor Council President Pat White. “We need our members to talk to their friends and neighbors about the importance of electing worker-friendly candidates in this election. We can’t let this election and our families’ futures be bought by CEOs and special interests.”

To participate in the Day of Action, meet at Genesis Banquet Center at 2651 Telegraph Road in south St. Louis County between 3-7 p.m. to get your canvasing assignment.

To find future events near you, text ELECTION to 235246. (Message and date rates may apply.)