“While the Federation has a tight operating budget this is an opportunity for a sound investment that will see solid returns vs money sitting in a regular savings account,” said Council President Mike Louis. “This is only a commitment and will not be executed until, and if, the balance of funds sought by the developers are actually in hand.”

“It’s not only a positive investment in the region’s economy; it’s part of the Council’s ongoing commitment to work with our unions and their management partners to further economic growth in our state whenever feasible which will benefit all union members,” added Council Secretary-Treasurer Jake Hummel.

The Delta Queen principles, all former senior employees, have “committed to be 100 percent union from the dock to the boat’s remodeling to the crew,” Louis said.

Operating as the Delta Queen Steamboat Company Inc., the group is working to raise $4.1 million towards a $10 million budget with 25 percent already committed. 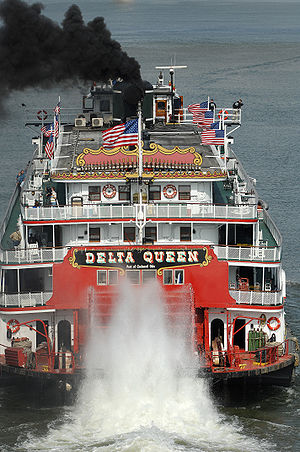 The funds will allow acquisition and total refurbishing of the historic steamboat.

The Queen is the only remaining authentic overnight river steamboat still in operable condition. The 176-passenger overnight steamboat plied the inland waterways for 85 years before ending operations in 2008. Bankruptcy forced the boat into new ownership, which turned the vessel into a dockside hotel in Chattanooga, TN. That only lasted a few years.

Designated a “national treasure” by the National Trust for Historic Preservation, the Delta Queen is considered the most celebrated steamboat in American history.

“We encourage other unions to consider a sizeable investment from their pension and any other available funds,” Louis said.

If the project proves seaworthy, it will create 150 new union jobs for St. Louisans and provide an estimated $94-$100 million economic boost to the region’s economy over the next 10 years, not including the potential ripple effect of that money being spent in the local economy.

“The goal is to get this national treasure back into the water operating in the same splendor and glory that befits this true river queen,” Sleeper said.

The new employees will be represented by the Seafarers.