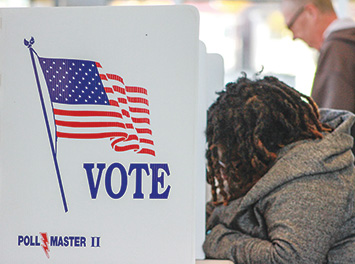 Hours after the Missouri Supreme Court ruled on Oct. 2 that certain provisions of state law restricting absentee and mail-in voting don’t unconstitutionally infringe on the right to vote, a federal district judge in a separate case ordered state and local election officials to accept mail-in ballots that are submitted in person.

A day later, the judge stayed that ruling so Republican Secretary of State Jay Ashcroft could appeal it, leaving the situation undecided for now.

Under state law, Missourians can vote absentee only if they have a statutorily authorized excuse. Absentee ballots can be mailed, with some required to be notarized and others not, depending on the excuse invoked.

CHALLENGED BY NAACP, LEAGUE OF WOMEN VOTERS
The chapters of the NAACP and League of Women Voters challenged the notarization requirements as inconsistent and confusing. The Supreme Court rejected their arguments, noting that there is no constitutional right to vote by absentee or mail-in ballot.

“The Missouri Constitution authorizes the legislature the discretion to allow those who are absent from the polls to vote, and the legislature has so provided by statute for more than 100 years,” the court said in its unsigned majority opinion. “In light of concerns raised by COVID-19, the legislature chose to put in place additional provisions allowing broader use of absentee ballots and temporarily permitting mail-in voting. The new absentee and mail-in ballot statutes do not affect the right of voters to go to the polls.”

WHO WILL BE COUNTED?
The federal case challenges a statutory requirement that prevents mail-in ballots from being counted if a voter personally delivers the ballot to his or her local election authority rather than sending it through the mail.