Fenton, MO – The Electrical Connection is celebrating its 27th year supporting a well-known law enforcement community trust building program by partnering with Saint Louis FC on a fundraiser for the Ferguson and St. Francois County holiday season “Shop with a Cop” programs.

For the third year in a row, the Electrical Connection and Saint Louis FC hosted a “Christmas in July” fundraiser at the July 27 soccer match against Bethlehem Steel FC at Toyota Stadium in World Wide Technology Soccer Park in Fenton, Mo. St. Louis FC won the game 3-0.

The game kicked off with a celebration of the “Shop with a Cop” program, featuring introductions on the field of law enforcement leadership and charity supporters and a video of last year’s holiday giving program. Fans received a limited edition 2019 jersey flag commemorating the event for a donation. The flag can also be obtained at the St. Louis FC Fan Shop at https://www.saintlouisfc.com/fan-shop.

Attending the game for Ferguson was its new police chief, Jason Armstrong, and officer Michele Merriwether. The attendees for St. Francois County were Lora Henson, the county’s “Shop with a Cop” coordinator, and deputy Jason Jones.

The Electrical Connection is a Labor-management partnership of the International Brotherhood of Electrical Workers (IBEW) Local 1 and the St. Louis Chapter, National Electrical Contractors Association (NECA).

“Shop with a Cop” raises money so law enforcement can take children December holiday shopping for gifts they would not otherwise receive.

St. Francois County’s program is one of the largest in the country, serving more than 500 children. Electrical Connection members have supported that program since its inception in 1993.

Members of the Electrical Connection provide safe and reliable electrical construction, maintenance, repair and replacement services across Missouri, the nation and the world. For more information visit www.electricalconnection.org. 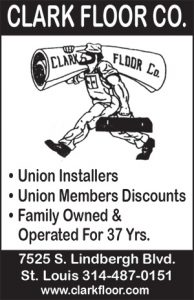