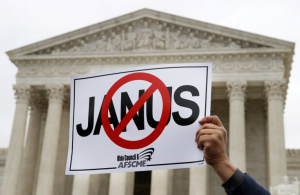 And it wants to wreck private worker unions, too, statements from its pre-Election Day two-day conference at the Trump International Hotel in Washington, D.C. show.

ALEC is seeking a wide range of anti-worker measures, particularly aimed at public unions. One, making every single state and local government worker a “free rider” who could use union services – bargaining and contract enforcement – without paying one red cent for them was legalized by the High Court in the Janus case.

After giving right-wing former Illinois worker Mark Janus – the plaintiff in the notorious case – a standing ovation at the D.C. conference, ALEC delegates got to work. Here’s what they came up with to push through compliant GOP-run states next year:

The “Public Employee Rights Authorization Act” states “No labor organization may collect a payment from a public employee until the employee provides affirmative consent,” in writing, which can be revoked at any time,” ALEC’s model law says.

• Write outgoing Wisconsin GOP Gov. Scott Walker’s infamous Act 10, which emasculated public worker unions into federal law, forcing all local public worker unions to stand for recertification by their members every year, and they could win only if an absolute majority of all workers in the bargaining unit – not just union members – votes “yes.”

The GOP-run Iowa legislature enacted such a measure two years ago, and public worker unions have had to go through that recertification process ever since. It’s backfired: More than 94 percent have won.

• Make union spending even more transparent – and thus open to the radical right’s inspection – than it already is under the 1959 GOP-passed Landrum-Griffin Act. That federal law forces unions to itemize their spending, in public records, on everything from paper clips to individual paychecks.

• Outlaw payment for “official time,” depriving public workers of union representation and defense in grievances and bargaining, by forcing shop stewards to handle such issues on their own time and on their own dime. Anti-worker lawmakers have tried to enact it for years.

Led by the president, the Trump administration has tried to ban payment of official time for shop stewards representing the nation’s two million federal workers.

A federal judge in D.C. threw out President Trump’s executive order banning official time payments. But Trump Education Secretary Betsy DeVos – whom ALEC trumpets on its website as a financial and political backer – has tried to impose it on her department’s workers anyway.

The agency workers’ union the Government Employees (AFGE) and the Treasury Employees are contesting DeVos’ action at both the bargaining table and in court.