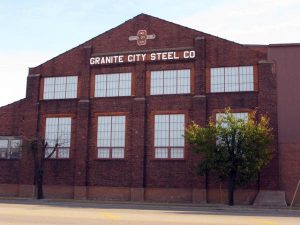 Granite City – Times keep getting tougher in Granite City. Now, more than six months past the indefinite closing of Granite City Steel, unemployment benefits have run out for most of the 2,000 laid-off employees.

Beyond that, the loss of worker contributions to United Way, combined with a lack of support from state government, is putting Tri-Cities service agencies in a bind and may force closure of some much-needed services.

“I’ve had people crying in my office – they can’t pay their bills,” he added.  “I’ve handed out more food in the past two weeks than I’d handed out the whole time up until then. I’ve got a food bank that’s almost empty.

“This is the worst time I’ve ever experienced in my 38 years working there.”

One ray of hope is coming from the Illinois Legislature, where the House will consider a 26-week extension of unemployment benefits for the steel workers.

Simmons and state Rep. Jay Hoffman (D-Swansea) came up with the plan when benefits started running out, but it was too late to push it through the latest legislative session.

NOT IF BUT WHEN

A veto session is expected to happen next in Springfield, and Hoffman said he will push the idea when that happens. The extension could be made retroactive to when the workers’ benefits ended.

Rep. Dan Beiser (D-Alton) is the co-sponsor. In an indication of possible bi-partisan support, the normally anti-labor Rep. Dwight Kay (R-Glen Carbon) has also signed on as a co-sponsor.

But when the bill will be voted on is hard to say. The veto session is not expected until after the November election. B. Dean Webb, president of the Greater Madison County Federation of Labor, on Thursday proposed that the Federation issue a proclamation and write letters to House Speaker Michael Madigan and Governor Bruce Rauner asking for a special legislative session.

In an earlier meeting at the union hall introducing the bill to steel workers, Hoffman said he expects strong support for the bill, whenever it comes up for a vote.

“I defy any legislator to vote against you guys, who have done nothing wrong,” he said. “It’s been a result of the foreign dumping of steel and foreign countries doing what is wrong.”

In that meeting, Madison County Board Chairman Alan Dunstan reminded workers that the real problem is unfair international trade practices.

“You are motivated workers,” he said. “You’re a good work force. You did nothing wrong. This is the result of illegal dumping in this country, and it has to stop.”

At the Federation meeting on Thursday, Simmons said the bill shows the value of electing labor’s friends.

“When you support labor-friendly candidates, that’s what you get – people who stand behind you when you need them,” he said. “When we focus on voting in politicians who are labor friendly, sometimes the reciprocation comes back twofold.”

He noted that he is bracing for another 300 members to lose their benefits in coming weeks.

Gene Hudson, the Tri-Cities labor liaison to the United Way, said payroll giving by Granite City Steel employees tends to account for 50-55 percent of the collection.

“While they’re out of work, there’s no money being taken out,” he said. “There’s just no way you can make that up. What happens is the agencies in the area don’t get their money.

“With (Gov. Bruce) Rauner in Springfield, with the grants that they have from the state, they don’t get their money from there. If you can’t get any money from anywhere, you can’t hardly stay open.”

He noted that a shelter for single women with children in Granite City is full and greatly needed but also preparing to close for lack of funds. It needs to raise $100,000 by the end of the year.

“They’ve still got to worry about next year. The money that would come in this year for next year is not there,” he said.

Hudson asked the Federation members to see if their union locals could possibly contribute more.

“I know everybody’s hurting and everybody’s tight, but every little bit helps,” he said. “We’re in pretty bad shape, but life goes on and we’ll try to do the best that we can with what we have.