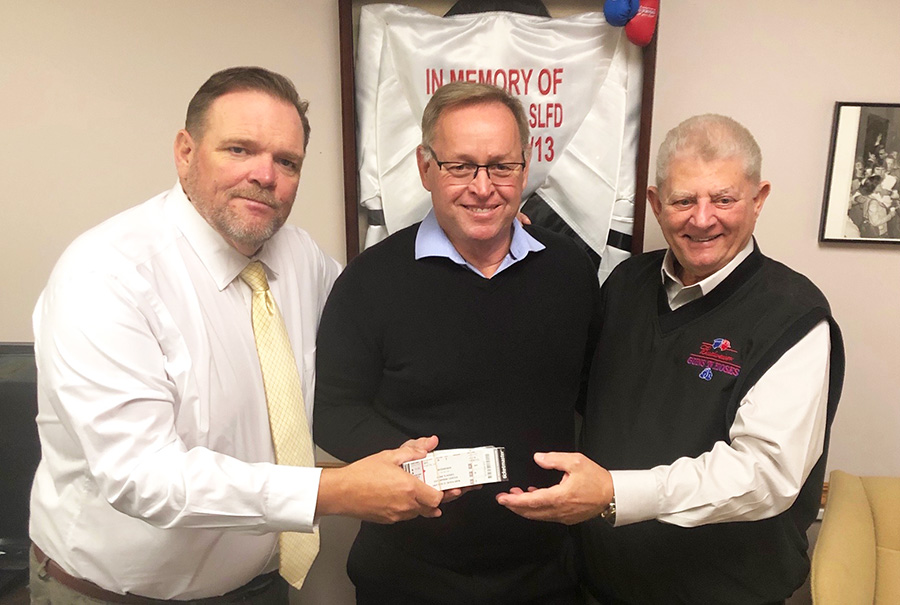 MEMBERS OF UNITED AUTO WORKERS LOCAL 2250 are still in recovery mode after their 40-day nationwide strike against General Motors that ended Oct. 24 with a new four-year contract. Helping make the holiday season a little brighter, Pat White (left), president of the St. Louis Labor Council and a member of the Guns ’N Hoses Board of Directors and Jack Martorelli (right), president of the St. Louis Port Council and vice president of the Guns ’N Hoses Board, presented Glenn Kage (center), president of UAW Local 2250, with roughly 300 tickets to this year’s Guns ’N Hoses fundraiser to share with his members. Founded in 1987, Budweiser Guns ‘N Hoses is a fundraising event, consisting of three-round boxing matches between area police officers and fire fighters, held on Thanksgiving Eve to benefit the BackStoppers, an organization that provides immediate and long-term financial aid and other support to families of fallen police officers and fire fighters. This year’s sold-out event will take place at 6:30 p.m. Wednesday, Nov. 27, at the Enterprise Center. – St. Louis Labor Council photo