Home Labor News From Our Region Heat is on for ALEC as tech giants ditch the conservative flagship... 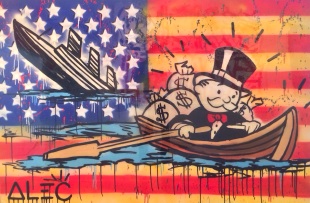 Facebook has unfriended the American Legislative Exchange Council (ALEC), joining fellow tech giants Google, Yahoo! Yelp and Microsoft in dropping their affiliation with – and financial support of – the conservative business-dominated bill-mill over, among other things, its denial of global warming and efforts to undermine renewable energy progress in states.

Microsoft started the exodus, ending its support of ALEC in August.

Before Microsoft, Coca-Cola, Pepsi, McDonald’s, Walmart, and Kraft decided to cut their ties with ALEC after teenager Trayvon Martin was shot and killed in 2012 and the public learned that ALEC supported controversial “Stand Your Ground” laws.

Astute union members have long been familiar with ALEC’s twisted worldview, in which “competing firms in free markets are the only real source of social efficiency and wealth,” according to The Nation. And “any force in civil society, especially labor, that contests the right of business to grab all social surplus for itself, and to treat people like roadkill and the earth like a sewer, should be crushed.” 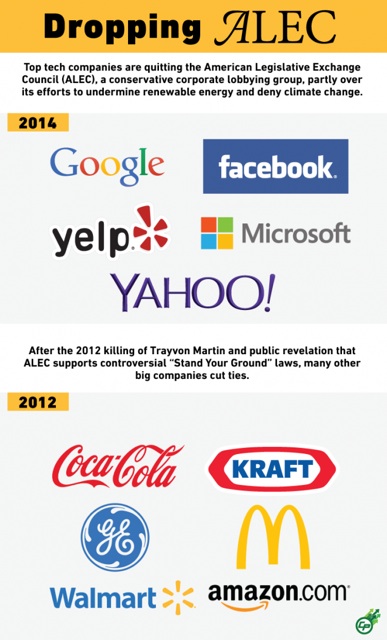 This latest funding crisis for ALEC will undoubtedly put additional pressure on the group’s newest stepchild, the American City County Exchange (ACCE), which was adopted by ALEC earlier this year to push right-to-work laws at the city and county level.

As the Labor Tribune reported in its Sept. 18 edition, this new tact is a two-pronged approach, designed to bring local governments into the anti-worker fight in order to prompt litigation as well as attract new donors to replenish the millions ALEC is losing as major corporations drop their public affiliation with ALEC, fearing an impact on their product sales.

ALEC’s goal with the ACCE is clear.

As The Guardian reports, “The extension of its techniques to city councils and municipalities across America offers ALEC the chance to open up a potential source of funding that might help it solve its budgetary crisis. There are almost 500,000 local elected officials, many with considerable powers over schools and local services that could be attractive to big business.

“ALEC makes the appeal to corporations explicit in its funding material for the new American City County Exchange. It offers companies ‘founders committee’ status in return for $25,000 a year and ‘council committee’ membership for $10,000.”

ALEC has been exposed as the designer right-to- work proposals and voter suppression laws, among many other anti-worker laws used as guides for conservative Republican legislators in various states, including Missouri where they were in the thick of the RTW effort, both pressuring legislators and funding of out-of-state groups coming here to testify.

Google Chairman Eric Schmidt explicitly called out the group’s climate denialism as the motivating factor for the tech giant’s separation from ALEC:

“Everyone understands climate change is occurring and the people who oppose it are really hurting our children and our grandchildren and making the world a much worse place,” Schmidt said. “They’re just literally lying.” ALEC has worked to kill renewable energy programs and teach climate denial in schools.

The bottom line, according to Think Progress, the on-line publication of the Center for American Progress Action Fund: “It’s bad business for companies to be associated with liars, and as more of ALEC’s distortions come to light, more companies will sever ties. They’re wrong on climate change, but once other businesses and the public realize how wrong they are on issues ranging from civil rights to economic inequality, other companies associated with ALEC will drop the organization too.”