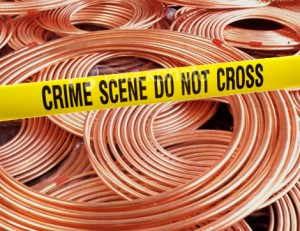 Belleville – There’s nothing more irritating than returning to the job site only to find that thieves seeking copper have made off with metal materials.

Thieves getting into electrical lines, air conditioners and abandoned properties can also cause hazardous conditions.

Such thievery has been a regrettable fact of life in Illinois for years. But legislators have now approved a bill creating a task force to look for a solution to the problem. It only needs the governor’s signature.

Rep. Jay Hoffman (D-Swansea) has been trying to deal with the issue for years, and this year he introduced House Bill 330 to create the Recyclable Metal Task Force.

Hoffman said he has seen no indication that Gov. Bruce Rauner might refuse to sign the bill.

The task force would include 18 people, including legislators, police chiefs and metal industry representatives.

Hoffman said the idea is to create a wide-ranging group to attack the problem. Copper theft has been seen from homes, businesses, telephone lines, power stations, construction sites and abandoned properties.

“Criminals committing copper theft are victimizing residents and local businesses alike,” Hoffman said. “This problem is not going to go away on its own. We need to come together to find an effective long-term solution before more damage is done.”