Workers Memorial Day Services in Missouri and Illinois marked the dignity of work and attributed the decline in workplace fatalities to the hard work of unions, something critics – and even some union members –overlook when they think unionism is only about wages and benefits.

The names of members who died on the job specifically or from work related illness or injury during 2013-2014 were recognized with a special ceremony before the mass outside the church.

“We are gathered today to honor our union brothers and sisters who, in the course of their daily work, made the ultimate sacrifice of giving their lives,” said Amy Phillips, labor liaison with the United Way of Greater St. Louis. “May we remember them always.

“We celebrate the vital significance of union workers lives and craftsmanship, much of which we admire in the restoration of this beautiful church, the Shrine of Saint Joseph, Patron Saint of the Worker.”

AN OFFERING FOR WORKERS

In a change from previous memorials, this year’s mass included a special recognition of workers’ lives, skills and craftsmanship, with a presentation and display at the altar of workers’ tools of their trades.

“Recognizing the dignity of work and the physical demands of our work, we bring to the altar now tools of the trades as symbols of the many tools, machinery, and equipment union workers use every day to build, to educate, to connect, to create and to care for our community,” Phillips said.

The tools presented included a shovel, tinsnips, a book (a copy of Studs Terkel’s Working), a broom and a saxophone.

“The shovel represents how deep we go in our meaningful daily work.

“These tinsnips represent how we create things that last.

“This book reminds us of all who educate others in the community.

“This broom represents how we make our world a better, cleaner place.

“This musical instrument and paper remind us of how we provide beauty and inspiration to the world around us.”

Unions have championed and fought for worker safety throughout their history, influencing state and federal regulations and investing in health and safety education and technical expertise to protect workers’ health and often save lives.

As union members, we can never forget what is at stake as we fight for workers’ rights.

Alton – The Greater Madison County Federation of Labor’s annual Workers Memorial Day Service April 28 had something special to celebrate – a full year without a work-related fatality in the Federation’s service area, and thus no names to be added to the Workers Memorial Monument in Gordon F. Moore Park.

Walker, the son of a Labor organizer, said he was delighted that the city’s showcase park could accommodate the event.

“It’s wonderful what Labor can do, and that can be seen from what Labor has done in this park,” Walker said.

Dustin Miller of the OSHA office in Fairview Heights noted that Workers Memorial Day commemorates the founding of the agency 40 years ago. At that time, the nation had an average of 38 workplace fatalities each day; now the average is 12.

OSHA has only 2,200 inspectors nationwide to inspect 8 million workplaces. Miller’s own office has only five inspectors for 39 counties in southern Illinois.

Madison County Coroner Steve Nonn said the decline in workplace fatalities can be directly attributed to union efforts, something people overlook when they think unionism is only about wages and benefits.

“Aren’t we here to speak for others who can no longer speak for themselves?” he said. “We are here to mourn the dead and fight for the living.

“We’re still under attack,” Nonn added. “Without the union, the protections workers enjoy today wouldn’t be there.”

Kenny Meyer, a retired member of Ironworkers Local 392 who worked to get the memorial built, described how the project came about, and credited former Federation President Charlie Moore with helping to make it happen.

“It took a lot of good people, laborers and craftsmen, to get this built,” Meyer said.

Everything was donated except for the statuary, which was paid for with donations.

and the organizers collected $52,000 in donations to pay for that. 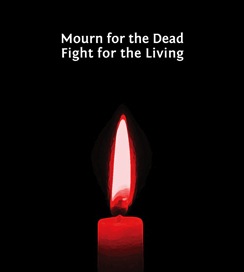