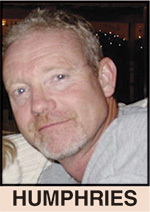 Brother Humphries worked as Local 309 electrician for 33 until he retired in 2012. He was known as a fun-loving, outgoing man who took country rides with his dogs, went camping, four-wheeling, and on float trips with his wife, family and friends. He also liked fishing and scuba diving.

Brother Humphries was born March 26, 1957 in Monahans, TX, to Mr. and Mrs. William Oscar Humphries. He married Myra Baugher on Sept. 26, 1981 in Staunton. He was on the high school track team, winning the conference title in high jump and, in 1975, setting a record of 6’3” that remained for 30 years.

A funeral service was held March 16 at Net Community Church in Staunton, with Rev. Derrick Taylor officiating. Memorials are suggested to the family.