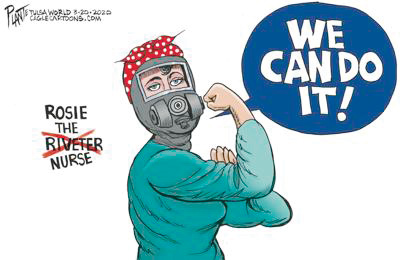 East Alton, IL – Health workers in the Metro-East are getting a helping hand from the region’s Labor Movement, which is banding together to provide healthy on-the-go meals for the hard-working nurses and others on the front lines of the COVID-19 pandemic, working to help the rest of us.

The project, “Snacks to Go – to Fight COVID-19” has an apt subtitle, “Labor Cares About Our Healthcare Workers,” which really explains what it’s all about.

Food and money collections are under way simultaneously. Distributions are being organized, hospitals all over the Metro-East area are being contacted, and anyone can help by dropping off some food items or donating.

“We needed to do something instead of sitting around doing nothing,” said Scot Luchtefeld, president of the Southwestern Illinois Central Labor Council. “A lot of us have time on our hands.”

The Council, the Greater Madison County Federation of Labor and the Southwestern Illinois Building & Construction Trades Council are leading the campaign with help from the Metro-East area Labor liaisons of the United Way.

IDEA CAME FROM A NURSE
B. Dean Webb, president of the Madison County Federation and a Machinist, said for weeks everyone was eager to do something to help, but they weren’t sure what that should be.

Webb’s niece, Megan Hudock, a nurse at Barnes-Jewish Hospital in St. Louis, mentioned to her mom, Phyllis Webb, that the hospital workers could really use a handy supply of on-the-go food like granola and apples to help them get through their long days on the job.

Phyllis mentioned it to their mother, Ann Webb, who promptly got on the phone with her Labor leader son Dean. Thanks, Mom.

“It just kind of grew from there,” he said. “The health workers are constantly on the run. If they could grab a granola bar or an apple, it would be a big help.”

Webb called on Luchtefeld and Totsie Bailey, executive secretary-treasurer of the Trades Council, and then the United Way Labor liaisons Terry Biggs, Nick Dodson and Terry Knoth, who applied their energy and know-how to help get things started.

“They were awesome,” Webb said. “We couldn’t have done it without them.”

“Dean Webb has really been the force behind the project, after he found out how some of the medical professionals were so exhausted from their work that they didn’t even have the energy to make something to eat when they got home,” he said. “The other Councils came on without hesitation.”

Dodson noted that giving to the campaign is more beneficial than just sending messages.

“These doctors and nurses working all of these long hours may be helping you or a loved one before this pandemic is over,” he said. “Clapping for them from our porches and sending thank-you notes is good for morale. Now let’s also give them something that physically helps them to help us.”

The fundraising effort kicked off last week with a GoFundMe page under the heading Snacks to Go – To Fight COVID-19 (gofundme.com/f/AFL-CIO-snacks-to-goto-fight-covid-19).

Between that and direct contributions, $700 was raised on the first night of the campaign. American Income Life pledged, as did SOAR Chapter 7-34-2. The Madison County Federation is kicking in $1,000 in seed money.

United Food and Commercial Workers (UFCW) Local 881 is working with Schnucks and Dierbergs to help the project buy its food, including fresh fruit, at bulk prices.

HOW YOU CAN HELP
There are a number of ways you can help.

WORK IN PROGRESS
Where the project will go in coming weeks had not been determined, but the union groups have generated a huge momentum to see it through.

“This is probably going to be a work in progress,” Luchtefeld said. “Everybody’s working together on it. We don’t know what will happen, but it will continue as long as the need is there.”

It’s all about helping the health workers, he added.

“They don’t have time to sit down and eat a meal,” he said. “They’re working massive amounts of hours, trying to take care of everybody.”