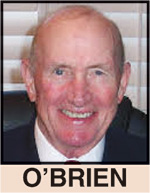 Thomas M. O’Brien, former president of Office and Professional Employees International Union (OPEIU) Local 13, passed away at the age of 85 on September 3, 2019, at his home in Peoria, Ariz., in the loving care of his spouse.

Brother O’Brien was born on May 31, 1948 in the City of St. Louis to parents Thomas Joseph O’Brien and Cecelia Lydia Huefe. He graduated from Webster University with a bachelor’s degree in Labor Relations, and later became president of Local 13 in St. Louis, serving from 1972 to 1976, during which time he pioneered organizing the first banks in the State of Missouri. In 1977, he joined the Federal Mediation and Conciliation Service (FMCS) in St. Louis, where he worked for 23 years, and was later promoted to deputy director of FMCS in Washington, D.C.

In 1991, O’Brien relocated to FMCS Mobile, Ala., office, was promoted to FMCS regional director in Cleveland, Ohio, and later promoted to National Deputy Director of FMCS in Washington, D.C., where he was involved in several of the largest and most significant collective bargaining disputes in the country. O’Brien was recognized internationally when he was assigned to train mediators in the Republic of Panama, Vorkuta and Moscow, Russia. After retiring from FMCS in 2000, O’Brien worked as a Labor Arbitrator practicing out of Missouri and Arizona for 18 years.

After retiring from FMCS in 2000, O’Brien worked as a Labor arbitrator, practicing in Missouri and Arizona for 18 years. He was also an avid St. Louis Cardinals fan, golfer, horse racing fan, literary enthusiast and poker player extraordinaire.