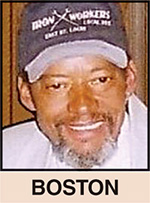 In addition to the union, Brother Boston was a music lover who enjoyed jazz, blues and reggae. He was an avid fisherman, a Methodist and a member of the VFW men’s auxiliary.

He was preceded in death by his parents – Muriel David and Geraldine Alice, nee Anderson, Boston, and one brother – Muriel Boston.

He is survived by two brothers – David Boston of Wreton, WA; Teddy (Priscilla) Boston of Sparta, IL, three sisters – Shirley (Charles) Barker of Carmel, IN; Alice Boston of Indianapolis, IN; Linda Boston of Quincy, IL, and several nieces and nephews.

A visitation and funeral was held on Saturday, March 16 at Heil-Schuessler & Sinn Funeral Home in Sparta with burial in Caledonia Cemetery.

The family requests memorials may be made to the American Cancer Society.