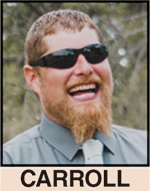 Brother Carroll was a journeyman iron worker and had worked on multiple projects around the country. He belonged to the Missouri Mules MC and enjoyed riding motorcycles and playing golf. But his passion was spending time with his family and friends, especially his wife, whom he married on Sept. 22, 2018, and his son.

A funeral service was held June 8, 2019 at Elias, Kallal and Schaaf Funeral Home in Godfrey. Memorials may be made to an education fund for Elias in care of Ally Carroll and mailed to the funeral home at 1313 W. Delmar, Godfrey, IL 62035.