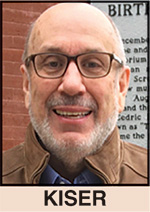 John Randall “Randy” Kiser, retired senior field representative for the AFL-CIO’s Midwest region, passed away April 4, 2019 after a brief illness. He was 63.

Brother Kiser was born in Greensboro, N.C., the only child of George and Hazel (Thomas) Kiser. He graduated from the University of South Carolina and was a lifelong Gamecocks fan. One of his favorite days was when Mizzou joined the SEC because he was finally able to see the Gamecocks play in Columbia, MO.

Brother Kiser was on the staff of the National AFL-CIO for many years and was a passionate advocate for working families throughout his life. After his retirement, he found immense pleasure in providing Medicare counseling through the CLAIM (Community Leaders Assisting the Insured of Missouri) program.

Brother Kiser will be remembered for his sunny outlook on life, his willingness to help anyone who needed it, and the corny jokes he would crack for the sole purpose of making others smile. He was always ready to tell you a story (even if you had heard it many times before). He will be sorely missed by his family and many friends.

He is survived by his wife, Martha; daughters, Emily (Rob) Cantwell and Rachel Kiser; and three precious grandchildren.

A memorial celebration of life was held April 9 at Calvary Episcopal Church, 123 South 9th Street, Columbia, Mo. In lieu of flowers, memorial donations may be made to Calvary or to the scholarship fund at the University of South Carolina.

Arrangements were under the direction of Parker-Millard Funeral Service and Crematory; 12 East Ash Street; Columbia, MO 65203. Parker-Miller can be reached by phone at 573-449-4153.