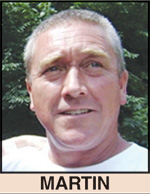 Robert Louis Martin, a member of Sheet Metal Workers Local 36, passed away on Sept. 14, 2019 following a valiant battle against cancer. He was 56.

Brother Martin, of Fulton, Mo., was as a union sheet metal worker in the area for over 30 years and took great pride in his work, often pointing out various buildings he had worked on in the community.

He enjoyed hunting, fishing and gardening with his family, and loved spending time in the woods mushroom hunting and looking for arrowheads along the creeks. He also was a deacon at Reform Baptist Church where he spent his Sundays.

He was preceded in death by his father, Edward Louis Martin, and his sister, Rosemary Martin.