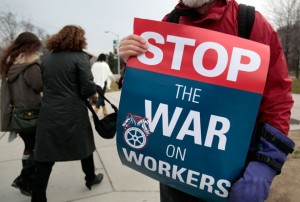 “Working for economic justice is an integral element of our faith traditions. The right of freely founding unions for working people and the right of those working people to bargain collectively are essential for economic justice. So-called ‘Right to Work/Freedom to Work’ laws proposed under the guise of freedom to the individual worker actually weaken their ability to equally bargain for fair compensation in the workplace, and are obviously and admittedly anti-union in their intent and render impossible or at least weaken the process of collective bargaining between management and labor.”

The Cabinet of Interfaith Partnership joins a growing bi-partisan chorus of faith leaders and public officials who have come out against the anti-worker agenda of House Speaker Tim Jones (R-Eureka) and other Republicans in the Missouri Legislature who have made anti-worker measures right-to-work, paycheck deception and anti-prevailing wage measures and primary focus of this year’s legislative session.

“I feel it is my duty and responsibility to express my own deep and troubling reservations surrounding this issue,” Waller wrote.

“Right-to-work is wrong for the people of Jefferson County and would lead to a decrease in our citizens’ ability to adequately support their families and would lead to a lower standard of living than they might currently enjoy. I strongly encourage all of you, as elected representatives of the people of Jefferson County, to keep all of these facts in mind when being asked to support these pieces of legislation and strongly oppose the efforts of those who would like to see this destructive policy change.”

Major municipalities and county officials across the region are sending a clear message to the Missouri Legislature that they strongly believe that pending right-to-work/freedom to work/workplace freedom bills are WRONG for Missouri.

Passing official resolutions against this relentless attack on Missouri’s working families are St. Louis County, the City of St. Louis, City of O’Fallon and City of St. Peters.

The St. Louis County Council passed a strong resolution condemning “…policies that undercut the success of working families and threaten the stability of the middle class do not result in enhanced economic development and, in fact, lead to long-term erosion of economic vitality as well as the degradation of the social fabric of the community…”

Introduced by Councilmen Steve Stenger, Mike O’Mara (member, Plumbers & Pipefitters Local 562) and Pat Dolan (president, Sprinkler Fitters Local 268), the resolution makes it clear that there is no reason to “… pander to out-of-state corporate special interests by adopting so-called ‘right-to-work’ policies that are demonstrably unsuccessful as an economic development tool and contrary to the public well-being.” 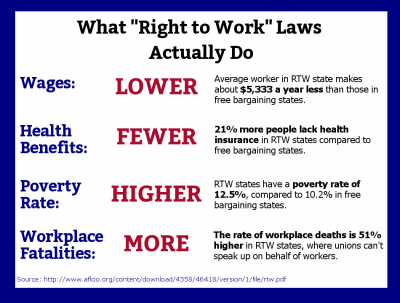 In O’Fallon, Councilman Bob Howell, a member of Plumbers and Pipefitters Local 562, said he felt it was appropriate for the city of O’Fallon to take a stand on the issue because it would have devastating effects not only on working families, but on residents’ spending power, tax bases and numerous other areas.

“As the third largest city in the state, I think it is right for the city of O’Fallon to stand up against any legislation that would harm working families,” Howell said. “Everyone on the Council was onboard, and the resolution unanimously passed.”

The City of St. Louis Board of Aldermen voted unanimously to oppose bills that would prohibit labor contracts from requiring all employees to pay union dues or a “fair share” fee or require unions to get annual rather than one-time written authorization to collect fees that are automatically deducted from a worker’s paycheck (Paycheck Deception). By federal law, a union must represent every worker covered by a union contract, non-members included.

The St. Louis resolution states “right to work” proposals would “harm Missouri’s families and threaten the livelihoods of working men and women.”