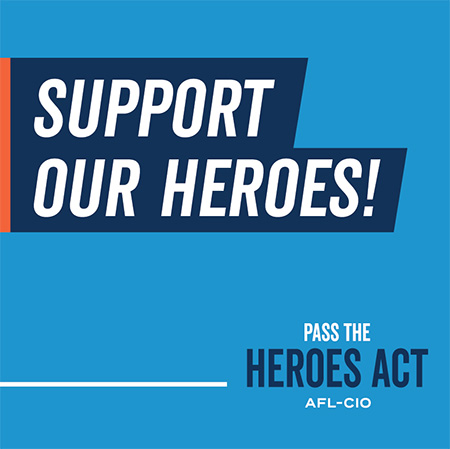 Washington (PAI) — The nation’s jobless lines — people collecting state or federal unemployment benefits — totaled 21.157 million in the week ending Oct. 24, or one in every seven workers, the Bureau of Labor Statistics reported. And that doesn’t include the 1.021 million more people who sought aid in the week ending Nov. 7, nor the 1.106 million who applied for aid in the week before that.

Add in the people who sought aid in the last two weeks, and the jobless rate rises to 15.9%, or nearly one in every six.

Despite those numbers, the Republican Senate majority still refuses to help them, especially those people whose benefits have already run out or who are headed for the rocks by the end of this year. NBC reported that latter group could total 13 million by Jan. 1.

Congressional Republicans aren’t the only ones turning a blind eye to the coronavirus plague and its resulting joblessness. President Donald Trump is still in denial, urging states to open up their economies, despite the skyrocketing coronavirus caseload.

But he’s really consumed with filing frivolous lawsuits trying to overturn his Nov. 3 election loss to Democratic presidential nominee Joe Biden. He’s not paying attention to the misery of either the virus-stricken and their families or the jobless and their families.

STATES ON THEIR OWN AGAINST CORONAVIRUS
The states, forced to battle anew on their own against rising coronavirus infection rates, again are rushing to clamp down on social interactions which lead to the spread of the modern-day plague. The U.S. set a new daily record on Nov. 11, 144,133, of the number of people testing positive for COVID-19, the disease caused by the coronavirus.

That raises the cumulative national total of ill people to 10,546,023, equivalent to the entire state of Michigan plus all but 5,000 people in Atlanta. Of those testing positive, the COVID-19 Tracking Project reported 61,694 are hospitalized, straining nationwide capacity, and almost a quarter of a million (242,066) have died. That equals the population of Norfolk, Va.

“Hospitals are already on the brink of being overwhelmed in Iowa, Kansas, Minnesota, Missouri, Montana, North Dakota, Texas, Utah, and Wisconsin,” MarketWatch reported.

“Each day this virus goes unchecked is a setback for our economic recovery.  Wisconsin, this is serious! The crisis is urgent,” Gov. Tony Evers (D-Wis.) said. Left unsaid: Wisconsin’s Republican-gerrymandered and GOP-dominated legislature, following Trump’s lead, overrode many if not most of Evers’s closures. Wisconsin residents are paying the price. Evers said the state set a new daily case record on Nov. 11.

HOSPITALS AT CAPACITY
And the situation in GOP-run North Dakota is so bad, MarketWatch added, that its hospitals have reached 100 percent capacity and there’s such a shortage of health care workers that those who test positive for the virus but show no symptoms “are being allowed to care for COVID patients,” GOP Gov. Doug Burnum said.

“The Heroes Act” — the original, more-comprehensive, House-passed $3.4 trillion version –should be the starting point, not an emaciated bill that prioritizes protections for corporations and considers the needs of American families as an afterthought,” Schumer said at a joint press conference Nov. 12 with House Speaker Nancy Pelosi (D-Calif.).

“The Heroes Act…does meet this moment. It doesn’t pick and choose who we’re going to help during the greatest health and economic crisis in decades,” he argued.

That original Heroes Act restores $600 weekly federal jobless benefits, which ran out July 31, on top of state aid. Besides more money for the jobless, it also demands Trump’s Occupational Safety and Health Administration force businesses to craft and implement plans to protect workers and customers against the virus.

And it orders Trump to invoke the Defense Production Act to force factories to make personal protective equipment (PPE) for frontline workers, among other provisions. Those are key demands of National Nurses United and its frontline health care workers.