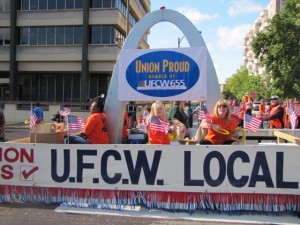 Labor Day parades and celebrations are taking place Sept. 3 in Belleville (10 a.m.), Granite City (10 a.m.) and St. Louis (9 a.m.). Come with your family, your relatives, friends and neighbors to help us show  our communities that belonging to a labor union counts for good paychecks, good benefits and economic benefits for every community. We’re the 99%. Let’s show our pride.

Lineup for floats begins at 8 a.m. and regular lineup begins at 9 a.m. on the first block of South First Street.

The parade will follow a route south on First Street to West Monroe, then north on South Illinois around the square to North Illinois to C Street, then west on C Street, ending at Hough Park.

A picnic will follow the parade, with inflatables and games for kids, food and refreshments.

No pets are allowed in the parade or at the park.

The picnic is free and open only to union members, and politicians by invitation.

The Greater Madison County Federation of Labor’s Annual Granite City (Tri-Cities) Labor Day Parade will step off at 10 a.m. Monday, Sept. 3. The theme of this year’s parade is “We are the 99%.”

The parade will follow a route east on Niedringhaus to Madison Avenue then to northeast on Madison to Wilson Park, where the annual Labor Day picnic will be held.

Marchers coming downtown for the Sept. 3 Labor Day parade are asked to get to their assembly places by coming across Jefferson Avenue then going east on Olive Street until you come to your assigned marshaling street.

All unions are also asked to send one representative of their union dressed in the union’s normal work clothes to march behind the leading “We are the 99%. Vote” banner that will be located at 15th and Market. The idea is to have a representative sample of the vast number of different jobs and skills that workers do every day.

In the forefront of the parade will be the:

• Clergy/Labor Alliance with religious leaders from all faiths joining the parade for the first time. Union members are asked to invite their own clergy to join the marchers by contacting Rev. Rudy Pulido at 314-368-0441 for details. The clergy will gather at 15th and Market.

The parade will kick off at 9 a.m. sharp from 15th and Olive Street, east to Tucker Blvd., move south on Tucker to Market, then west to end at 15th street.

All participating unions are reminded that there can be no throwing candy or other items from floats or vehicles.  Walkers alongside floats or vehicle are needed to hand out candy or favors to keep small children from running out into the street and possibly being hit by a moving vehicle.