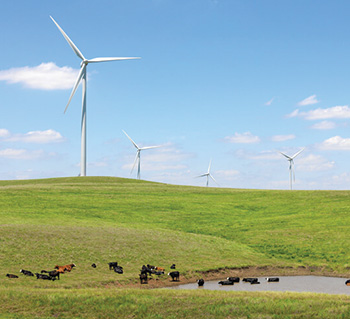 Jefferson City – An effort in the Missouri Legislature to block the Grain Belt Express, a major wind energy transmission line project that would put more than 1,500 Missourians to work over three years in construction and manufacturing jobs, failed in the last days of the legislative session, clearing a path for the project to go forward.

HB 2033, SB 618 would have essentially blocked Grain Belt Express developers, Chicago-based Invenergy, from using eminent domain to secure property along its planned route. The long-distance, high-voltage transmission line will move up to 4,000 megawatts of wind power from central Kansas across Missouri and Illinois. About three dozen utilities in Missouri have committed to purchasing some of the power.

The Missouri AFL-CIO had urged the General Assembly to abandon the last-minute attempt to block the project.

GENERATING JOBS
“More than 453,000 Missourians have filed for unemployment during this economic shutdown. Now is not the time to play politics with a $500 million investment from a private company,” said Mike Louis, president of the Missouri AFL-CIO.

“The AFL-CIO has supported this project from the beginning. But now it is of even greater importance that we protect the jobs and local tax dollars this project will generate at a time when so many Missourians are suffering through economic hardship.”

The renewable energy project is supported by Organized Labor and companies within the state’s manufacturing industry, like Hubbell Power Systems which is set to provide manufacturing and logistics for the project.

LIFELINE FOR COMMUNITIES
At a time when cities are already projecting losses due to decreases in sales tax and other important tax revenues, the project could be a lifeline for municipalities in the eight rural Missouri counties, generating $7.2 million annually in local property tax revenues, and saving hundreds of thousands of Missourians who receive electricity from consumer-owned, local utilities, more than $12.8 million on their electricity costs.

“During this crisis, we need to focus on how to put Missourians to work and put money back in their pockets,” Louis said. “Grain Belt Express does exactly that and will bring hundreds of millions of dollars of private investment into the state at a time when it is direly needed,” said Louis.