COVID-19 impact on construction could stretch into next year

St. Louis Lambert International Airport is canceling about $3.75 million in capital improvement projects at the request of Lambert’s airlines because of the effects of the coronavirus on the airline industry.

The projects involved are:

Rhonda Hamm-Niebruegge, Lambert’s director, said the move comes as the city-owned facility anticipates drastic reductions in revenue. She said the cancelled projects are among those funded entirely by Lambert’s airlines as part of their rate base. She said she hopes the projects can be done at later date.

Other projects deemed more essential will continue as scheduled, she said, including redoing roofs of buildings in Lambert’s air cargo area.

“Some projects we’re continuing to do that we felt couldn’t be postponed,” she said, adding that the cancelled projects will “hopefully” be revisited at a later date. 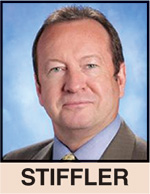 John Stiffler, executive secretary-treasurer of the St. Louis Building & Construction Trades Council, said the project cancellations are part of what is expected to be a significant reduction in jobs and economic slowdown caused by the pandemic.

“The impact of the coronavirus on our economy is going to stretch far beyond the current pandemic,” Stiffler said. “I believe the economic slowdown in some sectors and complete shutdown in others will affect future projects in 2020 and 2021. We’re going to have to be prepared for that.”

Still, although the near-term impact of the coronavirus pandemic is expected to be severe, Stiffler remains optimistic.

“This is an unprecedented situation, but we’ve been through recessions before,” Stiffler said. “Our members took a big hit during the Great Recession in 2008, but we came out the other side with billions of dollars in new work. We got through that storm and we’ll get through this. But we may have some rough times ahead.”

AIRPORT VENDORS LAYING OFF WORKERS
Hamm-Niebruegge said Lambert is seeing more than 2,400 departing and arriving passengers a day total, off from the normal 46,000 this time of year.

Southwest Airlines Co. , Lambert’s largest carrier, last week announced it will offer fewer than 60 daily flights a day out of Lambert  starting on May 1 — a drop of more than 50 percent since the coronavirus pandemic started.

Hamm-Niebruegge said no city airport staff have been furloughed, as the coronavirus relief package passed by Congress mandates that airports keep 90 percent of employees who were on payroll as of March 20. Other airport vendors have implemented furloughs, impacting members of UNITE HERE Local 74 and Service Employees (SEIU) Local 1.

The federal relief package, called the CARES act, includes $10 billion for airports, Hamm-Niebruegge, but said it’s too early to know how much could flow to Lambert or when.