Home Illinois News Long days, plenty of work for union members as rebuild of I-255... 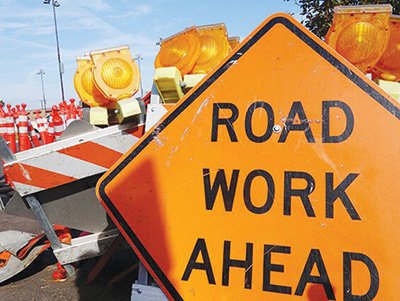 Collinsville, IL – Feb. 1 is the day of reckoning for anyone who uses Interstate 255 in St. Clair County. A short section of it will completely close for a major rebuild, targeted for completion in five months.

Until it’s finished, drivers who now use I-255 between Collinsville Road on the north end and I-64 on the south end will have to find other routes.

This is just the north section of the seven-mile total project. After it is done, workers will close the south section, which runs from I-64 to Illinois 15 at Belleville, for another five-month rebuild, scheduled for completion by Nov. 25.

The Illinois Department of Transportation (IDOT) calls the section “badly deteriorated,” and most drivers would agree. The plan is to get it done sooner by closing it altogether in two parts, making way for a four-inch layer of asphalt plus new guardrails, lighting and bridge decks.

“While this project will require a complete closure of the interstate to all traffic for one construction season, it enables the project to be completed cheaper, faster and safer,” the department said in a description of the project.

By shutting the entire road, the project can be done in 10 months instead of four years, cost $14 million less, increase worker safety and reduce accidents by keeping traffic out of the work zone, the department says.

The break point between the north section and the south section will actually be at Bunkum Road, just a skosh north of I-64, according to project maps.

The project is to cost $67 million. The bid was awarded to a joint venture of The Kilian Corp. and Keeley & Sons. They have already done some patching on the section.

PLENTY OF WORK FOR UNION MEMBERS
Jeff Kemp, a member of Laborers Local 100 and a delegate to the Southwestern Illinois Central Labor Council, told the Council at its meeting last week that IDOT is serious about getting the work done in 10 months.

“Oh, it’s going to get done,” he said. “They’re going to be working around the clock in two 12-hour shifts.”

The idea of closing one side at a time to keep some traffic moving was ultimately rejected.

“The contractors said, ‘Hey, let us just shut this highway down and work. We can get it done in half the time.’” Kemp said. “It would be a two-year project if we had to have traffic control out there, You would do a lane at a time, come back across and do the shoulders last. They’re going to do it in half the time.”

The adopted plan allows more of the state funding to go for the road instead of traffic control operations.

The project is also bringing great amounts of work for the union workers, he noted, the most ever for Local 100.

“It will be good for all the trades – there’s a lot of work out there this year,” he said. “Gov. Pritzker did what he said he was going to do down here. He didn’t stop at Springfield. He came down here and put some money into our infrastructure for a change.

“If a young man wanted to get into the trades, now is the time,” Kemp added. “IDOT is saying they’ve got work scheduled for the next eight to ten years.”

BYPASS PLANS
IDOT is preparing signs indicating detour routes that involve interstates 44, 55 and 70 for highway traffic. “Local traffic is expected to use alternate state routes to bypass the closure,” an IDOT report said.