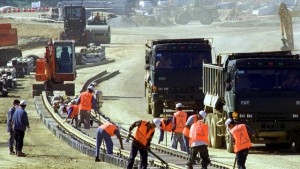 “We are facing a real crisis if we can’t find a way to come together at the federal and state levels to build and maintain our roads and bridges that are so important to Missouri’s economic future,” said McCaskill, a member of the Senate Commerce, Science, and Transportation Committee.

“We can’t afford to ignore this critical need. Not only will these investments make our roads safer, but they will also lead to a more robust economy by creating jobs and enhancing business opportunities across the state.”

With 33,702 miles of highway, Missouri has the nation’s seventh largest state highway system, with more miles than Iowa, Nebraska and Kansas’ systems combined.

The state also has more bridges longer than 1,000 feet than any other state.

MoDOT estimates the agency will need an additional $1 billion per year for 20 years to protect and build on the investment Missourians have already made in their roads and bridges.

She has also joined with a bipartisan group of Senators, including Republican Missouri Senator Roy Blunt, to introduce the Building and Renewing Infrastructure for Development and Growth in Employment (BRIDGE) Act, which would create a federal infrastructure bank to help finance infrastructure projects.