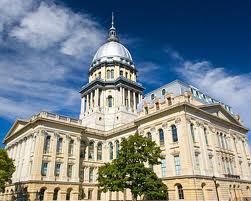 Collinsville, IL – Democrats hold 71 seats in the Illinois House of Representatives. That’s just enough to overturn a veto by Governor Bruce Rauner – with none to spare, not even one.

Unfortunately for several bills, including some supporting union goals, the party has not been able to hold its paper-thin margin together for most of its override attempts since Rauner took office.

So in the coming general election, Democrats and their union allies are looking to increase that margin so Rauner can no longer block worker-friendly legislation.

The Metro East and southwestern Illinois could be the key to improving that margin.

Rep. Jay Hoffman (D-Swansea), one of Labor’s top allies in the House, envisions a pro-union voting block here of five House districts – if the election goes as planned.

That would mean a net gain of two House seats, which would go a long toward making those veto overrides happen, barring major changes in other parts of the state.

THAT WOULD BE SUPER

All of the five except for Beiser appeared before the Southwestern Illinois Building and Construction Trades Council last week. Executive Secretary Treasurer Dale Stewart, emphasized the need for a “super majority” in the House to go along with strong Democratic control of the Senate.

“This governor just continues, every day, to chew on what we do as building trades people,” Stewart said. “He’s constantly after our prevailing wage, he’s constantly trying to starve us out, constantly wanting somebody else to do our work.”

Hoffman recalled how in 2012, he was pleased to be named chairman of the House Labor and Commerce Committee, but the feeling didn’t last.

“I thought and I hoped that we’d be able to make some progress,” he said.

Rauner is now doling out millions in campaign funds to little-known Republican legislators or challengers, such as $3 million coming to the novice Bourne.

But Democrats are fighting back despite Rauner’s lavish spending, Hoffman said.

“Right now, we have three very solid Democratic districts from the Metro East,” he said. “We can keep those three, but we can add two more, and that would give us a stronger voice for you in Springfield on the Democratic side of the aisle.”

The next big override fight may come on a bill Hoffman sponsored that would set into law the long-time practice of basing prevailing wage rates on contracts between unions and contractors.

Rauner is trying to undermine that practice, currently by using a new wage survey that would be based in large part on wages paid by non-union contractors.

The measure, Senate Bill 2964, was sent to Rauner in late May, and he is expected to veto it, setting up a critical override attempt.

Katie Stuart described her opponent as a part of the war on unions dating back to the 1700s when printers in New York and Philadelphia first banded together to halt a wage cut.

“It’s only because of their collective voice that they were successful,” she said, noting that she is a member of the Illinois Federation of Teachers (IFT). “That collective voice was their only tool, the only weapon they had against their employers.

“Now here we are in the 2010s, and labor unions in our state are under attack. Collective bargaining is under attack, prevailing wage is under attack, workmen’s compensation is under attack. And the attacker, as we all know, is Governor Bruce Rauner. And you and I know very well that the one who goes right along with Rauner is Dwight Kay.”

Latoya Greenwood, now director of human resources for the East St. Louis School District but also a former teacher and union member, defended the right of workers to organize, whether in the public or private sectors.

“It is together and not divided, on common issues such as quality education for all of our children, job creation, economic development and a pro-union stance, that we can, through mobilization, make a difference for this district,” she said.

“Through the freedom of collective bargaining, unions have improved wages and working conditions for everyone. I am a staunch support of the men and women of labor.”

Mike Mathis, a longtime United Mine Workers member, warned that Rauner and his allies want to bring right-to-work to Illinois.

He added, “This governor has made it very clear that he wants unions out of Illinois. To that effect, he’s giving my opponent $3 million. That’s how important it is.”

So he reiterated Hoffman’s point about building a veto-proof majority.

“It’s never been about me,” he said. “It’s about getting that magic number in the House so we can override the governor’s veto.”