Jefferson City – In a brazen move that should remove any doubt that extremist attacks on workers in the Missouri House this legislative session are all connected, a committee approved four anti-union bills last week, putting them into position for an early vote by the full House of Representatives.

The Republican dominated House Workforce Development and Workplace Safety Committee sent right-to-work, paycheck deception and anti-prevailing wage bills (HB 1053, HB 1143, HB 1306 and HB 1617 out of committee. The bills now go to a House calendar for a vote later this session.

• RTW: The bogus right-to-work (RTW) initiative would bar labor contracts from requiring that all employees pay union dues. (Federal law already allows workers to opt out of paying union dues, requiring only that they pay a fee for representation with employers for wages, benefits, grievances, and other workplace issues apart from politics.

• Paycheck deception: The falsely named “paycheck protection” measure would require unions to get annual written authorization to collect fees that are automatically deducted from a worker’s paycheck. Unions have labeled the issue “paycheck deception.”

If they clear the House and Senate, the right-to-work measure (HB 1053) and paycheck deception measure (HB 1617) would go before voters on a statewide ballot, avoiding a likely veto from Democratic Gov. Jay Nixon.

“It is disappointing that the Workforce Development and Workplace Safety Committee would approve this laundry list of bills – an agenda that won’t develop any jobs nor protect the safety of Missourians at work,” said Mike Louis, secretary treasurer of the Missouri AFL-CIO. “In fact, they would make it more difficult for Missouri workers to provide for their families and would make workplaces in our state less safe.”

The party-line vote by the Workforce Committee is just the latest effort by Republican extremists in the Missouri Legislature to move the dangerous anti-worker agenda backed by out-of-state interest groups including the American Legislative Exchange Council (ALEC) in a bald-faced attempt to cripple unions and eliminate the collective bargaining rights of working Missourians.

"Politicians in Jefferson City need to start working on job creation instead of making it more difficult for me to do my job,” said John White, of Sikeston, a Developmental Assistant II for the State of Missouri and a member of AFSCME Council 72. “As a union member, I voluntarily contribute to a voice to all workers, and I don’t need extremist politicians to get in the way of my freedom to make that decision."

To ensure that working Missourians know what’s at stake, the Missouri AFL-CIO has been sponsoring Urgent Member Meetings at labor clubs and union halls throughout Missouri and the St. Louis area (See “Urgent Member Meeting schedule” on Page XX to find a meeting near you.)

The Jefferson County Labor Club hosted a meeting for more than 200 union members last week in Arnold. It included a presentation, helpful handouts with facts on right-to-work and a plea for union members to spread the word about this deceitful and destructive legislation.

And where is this call to silence workers coming from?

There’s been no outcry from Missouri business begging the legislature to clip the wings of unions, Sherwin said. The pressure comes from outside groups like ALEC and the National Right-to-Work Legal Defense Foundation, well-heeled corporate front groups funded by the likes of the ultra-conservative Koch brothers, who collude with extremist legislators to push their anti-worker agenda.

HOW YOU CAN HELP

Missouri legislators need to hear from real working Missourians – the people who actually vote these representatives into office and are counting on them to serve their interests.

Here’s how you can help: 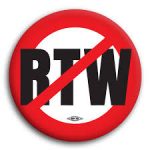 • Call 888-825-1418 to be connected with your representative and tell them you oppose right-to-work, paycheck deception and anti-prevailing wage bills.

• Attend one of the Urgent Member Meetings taking place across the St. Louis area to learn all you can about right-to-work and the other anti-worker initiatives coming out of the Missouri Legislature.

• Talk to your family, co-workers, friends and neighbors about right-to-work and why it is wrong for working people and wrong for Missouri.

Your voice can make a big difference.

Make that call; attend your local Urgent Member Meeting; speak out on social media. Talk to everyone you meet, and help stop these unfair attacks on collective bargaining.