Contractors and sub-contractors working on public works or commercial building projects are being encouraged to submit wage surveys to the Missouri Division of Labor Standards so officials can determine prevailing wage rates.

The Missouri Legislature changed how the Department of Labor and Industrial Relations calculates the prevailing wage in the last legislative session by requiring wage surveys to be split between union and non-union wages, then set by whichever group, union or non-union, reports more hours of work.

“It’s critical that you report your hours by mid-January,” said John Lindsey, director of Missouri Division of Labor Standards. “It’s a very complicated system, and the new laws didn’t simply it at all.”

Lindsey and Tom Bastian, director of communications for the Missouri Department of Labor, were guest speakers at the Nov. 10 Labor Law Breakfast. They provided guests with a flowchart handout describing how the prevailing wage is determined. (See attached graphic.)

Lindsey said the prevailing wage rate applies to all public works projects constructed by or on behalf of state and local bodies. He noted that the rate differs by county and occupational title. 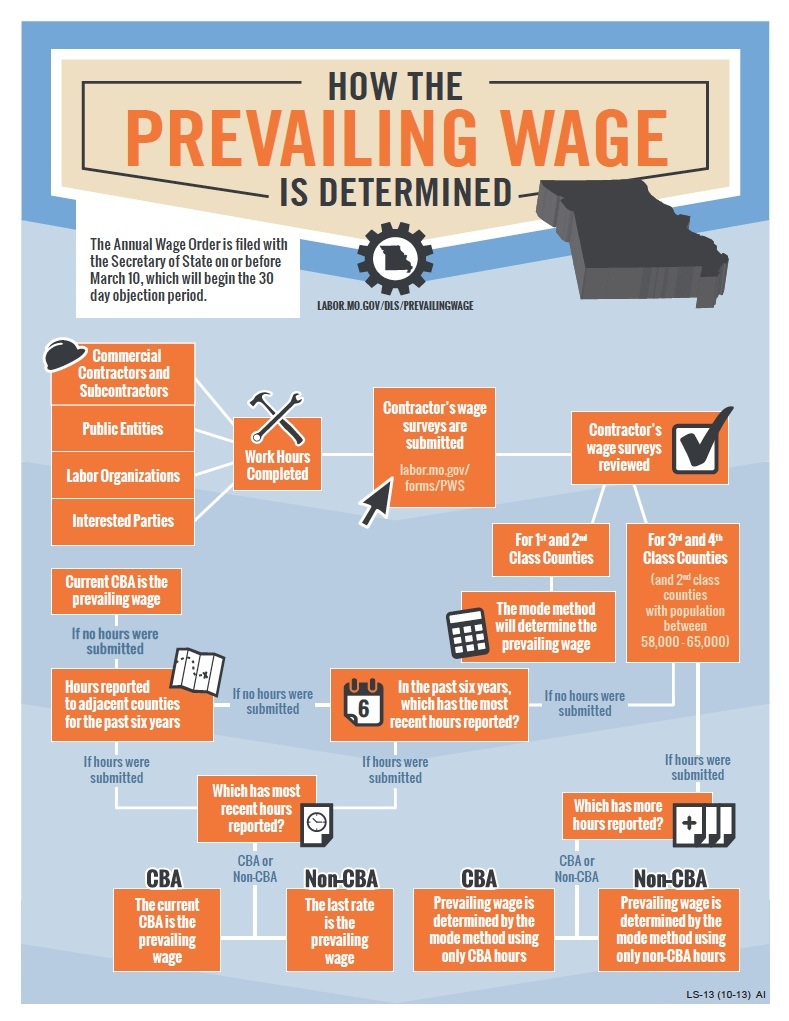 In counties in which hours are submitted for the calendar year through the wage survey, the division will select the wage that is used the most to set the wage for each occupational title in that county, Lindsey said.

Second-class counties with populations outside of the range of 58,000 and 65,000 are excluded from this standard.

If no hours are submitted for an occupational title, the current Collective Bargaining Agreement (CBA) will be the prevailing wage.

In third and fourth class counties (and second-class counties with populations in the 58,000 and 65,000 range), if hours are submitted for an occupational title, the DLS must separate the hours by CBA and non-CBA, Lindsey said.

Based on the grouping with the most submitted hours, the DLS will determine the prevailing wage based on the wage that is used most.

If no hours have been submitted during the previous six years for an occupational title, then the DLS must review all hours submitted by all third- and fourth-class counties that share a border, Lindsey said.

The most recently reported wage rate in the adjacent county with the most reported hours will be used to determine the prevailing wage.

The annual wage order must be filed with the Secretary of State on or before March 10. That’s when the 30-day objection period begins.

For questions about the state’s prevailing wage or the contractor’s wage survey, call 573-751-3403 or send an email to laborstandards@labor.mo.gov.

The Labor Law Series is sponsored by the University of Missouri Extension St. Louis County and is held on the second Wednesday of each month at IBEW Local 1439 Hall, 212 59th St. in St. Louis.

The cost is $15 per person or $150 annually. To register, contact Rob Russell at russellrob@missouri.edu.