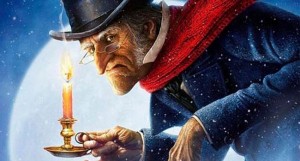 Each year, Kansas City and St. Louis Jobs with Justice member organizations nominate candidates for "Scrooge of the Year". Organizations run spirited campaigns online, at their workplaces, and in their community, culminating in a "Holiday Party with an Attitude" to educate the public about the forces harming working families.

The greediest, most cold-hearted CEO, politician, corporation or 1%er who truly exemplifies the Spirit of Ebenezer Scrooge wins!

The Missouri Restaurant Association, nominated by Service Employees International Union Local 1 and UNITE HERE (restaurant, hotel, garment workers) Local 74, was selected for attacking the minimum wage every year in the Missouri Legislature and doing its part tying up the 2012 ballot initiative to raise Missouri's minimum wage in court.

Ever since the last voter-approved minimum wage increase in 2006, the Missouri Restaurant Association has tried to peel away some part of Missouri's minimum wage: the Cost-Of-Living-Adjustment, young workers' minimum wage, or the minimum wage for tipped employees.

This year they filed several law suits against the ballot initiative to raise Missouri's minimum wage $1 to $8.25 and helped defeat the measure by tying it up in court.

Congratulations to the Missouri Restaurant Association on demonstrating the most Ebenezer Scrooge-like behavior in 2012.

Of course, the Scrooge of the Year competition wouldn’t be complete without giving…er…credit to the other nominees.

Here, then, are the other Scrooge-like candidates from this year’s competition.

As the author of Arizona's SB 1070 and Alabama's HB 56 (two of the worst anti-immigrant state laws in the country), and SB 590 in Missouri, Kris Kobach has shown a personal mission to proliferate his notorious "self-deportation" policies.

The crux of these policies being to make daily life for the immigrant population so difficult and dangerous, that foreign-born residents simply leave a state. By pedaling these measures and ordinances at the state and local level, and then defending them when they ultimately go to court,

Kobach has exploited several working-class towns throughout America for his own financial gain.

Kobach has also garnered national infamy for his advocacy of voter suppression measures.

Working with ALEC, he has authored many of the measures introduced around the country to make it harder for working people and naturalized citizens to vote.

Predatory lender? Criminal Offender? From ill-gotten gains from those in our State who can least afford it, this payday shady lender (QC Holdings) took millions of dollars out of their obscene profits and bought off our people's Cap the Rate initiative petition.

The largest payday loan operator in Missouri, they used their own low-wage employees for a citizens front group, supported phony petitions and used shameful tactics, intimidation, and coercion to confuse voters.

They played a role in providing bullies and thugs in the field to dissuade our volunteers and they ultimately were able to keep their 400 percent plus interest rates.

Horton and his company have savaged American Airline employees through every conceivable means. He has frustrated 6,000 customer service agents for more than a year in their attempt to organize with CWA and has attempted to use the bankruptcy process to destroy American Airlines' benefits.