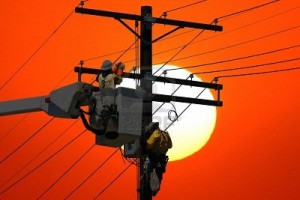 Jefferson City – A new utility workers protection law passed in Missouri could become the model for similar laws across America.

As a result of efforts by retiring Missouri Senator Tim Green, an aggressive campaign by the Missouri State Utility Workers Conference (MSUWC) and utility workers locals across the state, utility workers in Missouri now will have the same strong protections against assaults as those enjoyed by police, fire fighters and road construction crews. The effort was supported strongly by a series of articles in the Labor Tribune that outlined the hazards utility workers have faced with little legal support to discourage harassment and life threatening acts.

After a three-year struggle that almost died again this year, HB 1516 was recently signed into law by Governor Jay Nixon. It covers utility workers in the gas, heat, electricity, water, steam, telecommunications services, or sewer services industries, whether privately, municipally, or cooperatively owned.

The new bill provides for stiff penalties up to and including a Class A felony, including jail time. Previously assaults and threats against utility workers – and there were untold numbers of them – were considered misdemeanors.

“As a result of what we’ve done in Missouri, utility workers locals across America have been calling asking for copies of the bill and information on how it was done,” said Mike Walters, MSUWC president and business manager of IBEW Local 1439. “The passage of this law has created a lot of excitement across the country and will, eventually, result in much safer working conditions for utility workers everywhere,” he stressed.

“We kept at this for so long because safety of our members is one of our uppermost concerns,” Walter told the Labor Tribune. “While we have a strong safety culture in utility worker locals, it wasn’t until the past few years that the issue of our members’ safety from public abuse and threats came to the forefront. That’s why we’ve moved so aggressively on this.”

Added Warren Wood, vice president Regulatory and Legislative Affairs for Ameren Missouri: “Ameren Missouri is pleased to support legislation that aligns with our focus on safety. The bill can potentially remove distractions from our skilled craft employees and foster a safer work environment.

“We are impressed with the leadership of our unions on this issue and Ameren Missouri was pleased to work alongside our unions. We are delighted that Governor Nixon signed the bill, and it is now law,” Wood added.

A great deal of credit for the bill’s final passage goes to just retired Senator Tim Green (D- North County) who worked behind the scenes to get the bill attached to a key safety law, Walters said.

“Utility workers and their families are indebted to Senator Green. It was his experience and finesse that got this through a legislature that was balking at the bill’s passage, again.  It’s a crime that he is term-limited out of office. That’s an enormous amount of knowledge and talent being lost.”

Walters also expressed appreciation to Governor Nixon for signing the bill, which shows his ongoing concern for working families.

“The next step is for this change to become more widely known by the public so that the consequences of threats to our members lives and safety will be understood,” Walter said. “We will work with the utility companies throughout Missouri to help publicize this new law and its consequences to the public.”

Part of the difficulty in getting the law passed, the Labor Tribune was told, was the anti-union bent of many Republican legislators who repeatedly killed the bill in previous sessions.

Representative Rod Schad (R-Lake Ozarks), the bill’s sponsor, told the Labor Tribune,  “The opposition feels utility workers are not as valued as police officers. That’s nonsense. They provide a crucial service and they are coming under attack. They deserve the same protections.”

A prime example of this feeling was the opposition to the bill by Representative Kathie Conway (R-St. Charles) whose father was an Ameren Missouri lineman! Her reasoning: including utility workers would be “cheapening the law” or, put another way, “deluding the pool of people (the law covers) will reduce the protection for everyone,” she told the Labor Tribune in an interview in March.

“This was never a union vs non-union issue, it was an issue of protecting lives of all workers who provide a valuable, often critical, service to the public,” Walters stressed.

Despite the hundreds of reports of serious attacks on utility workers, especially lineman, she added: “I don’t believe it’s a major problem,” and reasoned that if utility workers were included in this law, “they (the utility worker) might be more emboldened (to confront a homeowner) if they have that (protection).”

In one of those cases, a disgruntled person drove up to three men working 30 feet in the air and began shooting at them with a shotgun. Two were seriously wounded.

A review of Field Incident Reports from Ameren and Laclede Gas shows that threats against utility workers are a pretty common occurrence, something state lawmaker opponents to HB 1516, recently signed into law by Gov. Jay Nixon, apparently don’t understand. Some examples taken from those reports:

• “I’ll rip your throat out if you disconnect me.”

• “The man told me to get off his property or he was going to shoot me. We cut the service at the pole with police assistance.”

• “While trying to complete the job (of turning off the gas at a business) the owner and two employees came out the back door. The owner charged me and attempted to tackle me to the ground. I was able to control him on the ground until one of the employees began kicking and punching me. I got up to control him and while doing so the owner got a long 2×4 and struck me several times. Two of the strikes were directly down the center of my head…” Ultimately the owner was charged with a misdemeanor and received a small fine.

• “I heard him yelling that he was going to shoot someone today. At that time, I left the porch headed for my truck and his wife was yelling for him to stop. At that point he came out with a shotgun. I told him I was leaving and there was no need to do anything that he would regret…. Three police cars went to his house and arrested him and took the gun from the house…”