The National Labor Relations Board, the federal agency that enforces federal labor laws, is contemplating a rule change that would chip away at state right-to-work laws.

The change would allow unions to charge nonmembers “fair share” fees to file workplace grievances with the board.

The fees would effectively circumvent right-to-work laws, which prohibits workers from paying a “fair share” fee for the representation the union must provide them.

The board’s move is an apparent reaction to a case decided last year in which a board administrative law judge ruled that a Florida union violated the state’s right-to-work law. The case involved a worker who had opted-out of union membership but sought in 2013 to file a workplace grievance with the board through the union.

Under the union’s contract with the employer, as with most union contracts, workers were not allowed to file grievances on their own or with outside groups.

The Florida worker abandoned his effort after he learned the union would charge him the equivalent of three years’ worth of membership fees to process the grievance.

The judge threw out the union’s grievance rule, stating that it clearly violated the state’s right-to-work law. In the ruling, the judge said the applicable board rule was “well settled and unambiguous in this case.” 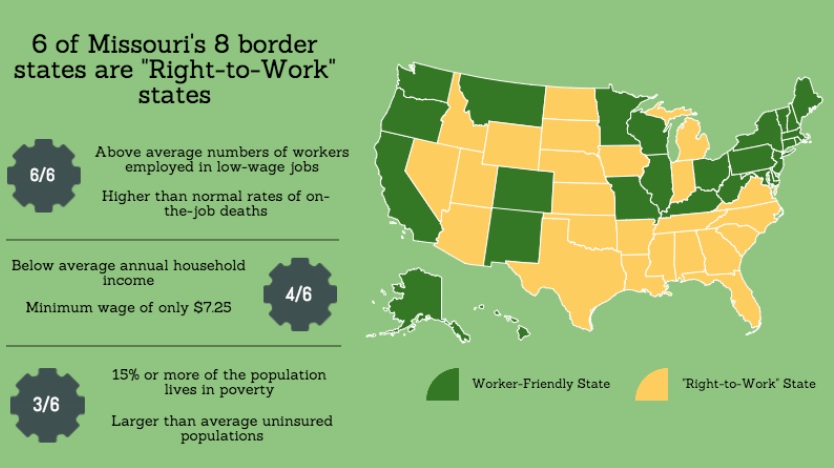 The board, citing the Florida case, announced it is seeking legal briefs on the issue of “whether … the board should adopt a rule permitting unions to collect fees from nonmembers for grievance processing.”

The notice, a preliminary step in the board’s rulemaking process, asked lawyers to submit arguments regarding what factors it should consider when determining “whether the amount of such a fee violates [the National Labor Relations Act]?” as well as “what actions could a union lawfully take to ensure payment?”

The notice also seeks comments on whether unions could charge non-member workers fees to file workplace grievances even if the union wasn’t explicitly allowed to under its contract with management.

In effect, the board is asking labor lawyers to make their cases for why the judge’s ruling was wrong in the Florida case and what legal standards the board should adopt to make that clear in future cases. This, critics argue, would chip away at right-to-work laws themselves.

Earlier this month, the NLRB urged a federal district court in Kentucky to invalidate a county ordinance that prohibits the use of union-security provisions in collective bargaining agreements and regulates other practices that are either permitted or prohibited by federal law.

Hardin County’s Ordinance 300 is preempted by the National Labor Relations Act, the board argued in a proposed amicus brief it submitted to the U.S. District Court for the Western District of Kentucky. The court is considering a lawsuit the United Auto Workers and other unions filed in January to challenge the ordinance.

The brief contended that while Section 14(b) of the NLRA allows states or territories to prohibit union-security agreements, it does not authorize counties or political subdivisions to adopt similar measures, which the board said are preempted by federal labor law.

The NLRB also argued that Ordinance 300 is preempted to the extent it outlaws union hiring halls, regulates dues-check-off agreements, and prohibits coercion and discrimination related to support or nonsupport for a labor organization. Regulation of those matters falls under Sections 7 and 8 of the NLRA and is unaffected by Section 14(b), the board argued.

Nine unions, including locals of the United Auto Workers, the International Brotherhood of Teamsters, the United Food and Commercial Workers, the International Brotherhood of Electrical Workers and the Communications Workers of America, joined in the lawsuit, which was filed shortly after Hardin County, adopted its ordinance in January. The county was one of five in Kentucky to adopt similar measures.

(Information for this story from the Bloomberg and the Washington Examiner)