Washington – The number of women working in construction trades increased by 17.6 percent between 2017 and 2018 in the United States, rising to well over a quarter of a million women, according to a new analysis from the Institute for Women’s Policy Research.

That jump equates to the highest share of tradeswomen working in the industry in 20 years, and it’s nearly five times faster than the 3.7 percent growth in construction occupations overall.

While the numbers are trending in the right direction, women still remain strongly underrepresented in the trades. Fewer than one in 20 (3.4 percent) construction trades workers were women in 2018.

“In 2019, women’s stark underrepresentation in these well-paid jobs is disconcerting, but it is very encouraging to see such strong growth in the number of women entering the construction trades,” said Ariane Hegewisch, IWPR employment and earnings program director.

St. Louis Building and Construction Trades Council Secretary-Treasurer John Stiffler called the results of the new study fantastic news. While the number of women in the building trades is difficult to track in the St. Louis area, he said there definitely has been an uptick in the number of women joining the trades.

“Our building trades unions are all making a concerted effort to recruit more women and minorities,” Stiffler said. “We are beginning to look more like the communities we serve and have seen growth through the roof in the number of women and minorities joining the trades. It’s a tremendous opportunity for the St. Louis area.”

MORE WORK TO BE DONE 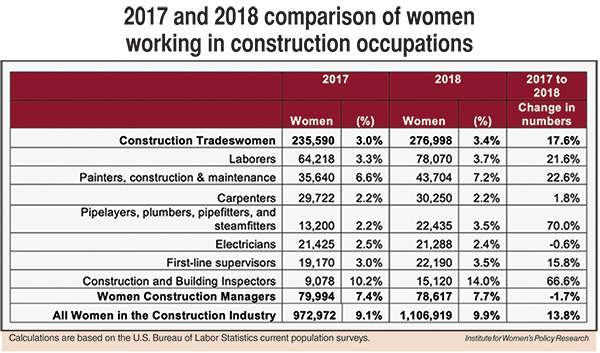 Hegewisch said the industry still has more work to do to attract and retain tradeswomen and to create a work environment that is welcoming to all workers, regardless of their gender race or ethnicity.

ST. LOUIS EXAMPLE OF GREAT WORK TO RECRUIT WOMEN
St. Louis is a shining example of the some of the great work being done to recruit, retain and mentor women in building trades with the Building Union Diversity (BUD) program and Missouri Women in Trades. 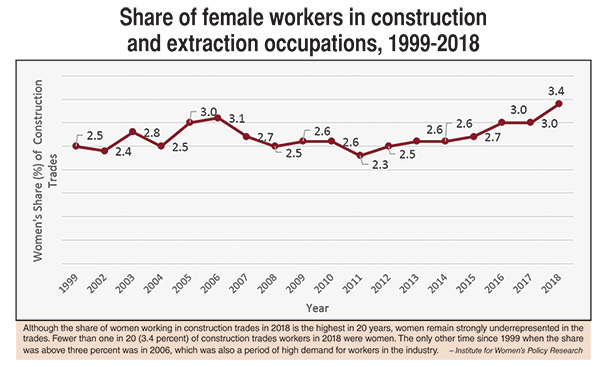 The BUD program was launched in 2014 as a recruitment tool to get more minorities and women into the building trades. It’s a partnership between the St. Louis Building & Construction Trades Council, the Eastern Missouri Laborers District Council and the St. Louis-Kansas City Carpenters Regional Council, with funding from the St. Louis Agency on Training and Employment (SLATE) and the Missouri Division of Workforce Development.

HOW THE BUD PROGRAM WORKS
Local unions open their training centers for pre-apprentices enrolled in the five- to eight-week program to give them basic training and a feel for each of the trades. The United Way and Metro provide participants with transportation and assistance with other needs that may be preventing them from getting or keeping a job. At the end of the program, participants take part in a graduation ceremony.

Since its inception, 173 have completed the program, said BUD Program Director Russ Signorino. Of that number, 40 (23 percent) have been women.

“When we first started the program, we had a couple women in each class, but we are definitely seeing an increase in the number of women wanting to join the trades,” he said. “The last two classes have had six women each, and we’re working on putting together a class specifically for women.”

MISSOURI WOMEN IN TRADES
Founded in 2006, MoWIT is a non-profit organization dedicated to expanding opportunities for women to enter and succeed in apprenticeship and careers in the construction and building trades in the greater St. Louis area.

The agency works with employers, unions, educational organizations and other allies to increase equal employment opportunities and equitable working conditions for women. Members of MoWIT also serve as mentors for women in the BUD program.

MoWIT President Beth Barton said the organization has noticed an increase in the number of calls over the last couple of years from women seeking to enter the building trades as well as the number of women attending the group’s monthly meetings, which are held the second Wednesday of each month.

FOR WOMEN INTERESTED IN ENTERING THE TRADES
Women interested in participating in a future BUD class should contact the St. Louis Agency on Training and Employment (SLATE) at 314-657-3545. For more information on MoWIT, visit mowit.org, call 636-926-6948 or email info@mowit.org. You can also text “JOIN MOWIT” to 43786 to get news, information and meeting reminders.