Union, MO – Operating Engineers Local 148 has filed suit against the Franklin County Commission over the board’s refusal to bargain in good faith a contract with union employees in the County Highway Department.

Local 148 represents 51 members in the Highway Department. Although originally certified by Operating Engineers Local 2, – which later merged with Local 148 – their current contract, which expires on Dec. 31 of this year and all contracts negotiated since 2006, were negotiated by Local 148. But the County Commission is refusing to recognize Local 148 as the certified representative of the Highway Department workers and demanding an election –conducted by the County Commission – to certify Local 148 as the employees’ representative.

The County is relying on a Collective Bargaining Policy (Commission Order 2019-337), which the County Commission issued on Aug. 13, 2019 to justify its demand for an election, despite Local 148 having been certified by the Missouri State Board of Mediation (MSBM) as the employees’ exclusive bargaining representative. The Commission Order also restricts topics which can be bargained.

Local 148 Business Representative Doug Williams said the union was forced to file suit by the County’s refusal to come to the bargaining table.

“We want to get a ruling from a judge compelling them to recognize us as the bargaining agent,” Williams said. “We’re also seeking legal fees, because we don’t believe we ever should have had this fight.”

IGNORING BARGAINING HISTORY
Not only is the County Commission demanding a recertification election and restricting bargaining topics outside the letter of the law, county commissioners are ignoring the County’s own actions over the past 13 years. Here’s the timeline:

“The County Commission recognizes the INTERNATIONAL UNION OF OPERATING ENGINEERS, LOCAL 148 as the sole and exclusive bargaining representative of eligible employees of the FRANKLIN COUNTY, MISSOURI, HIGHWAY DEPARTMENT.”

But the County still won’t bargain. 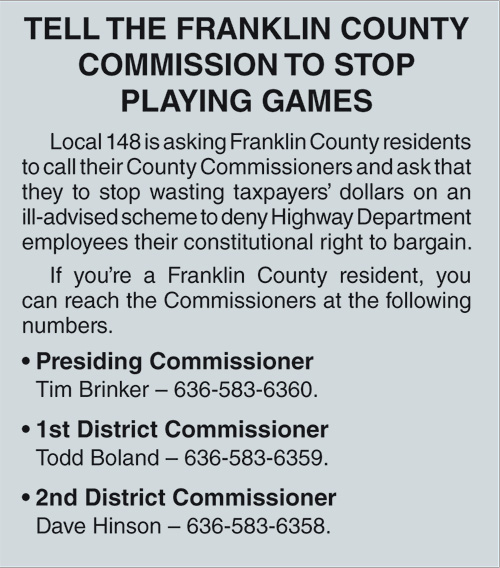 TRYING TO ENFORCE A CHALLENGED LAW
Instead, acting on advice from Sandberg Phoenix law firm, the County is claiming Missouri House Bill 1413 (HB 1413) requires a recertification election, and further, that the election should be conducted by the County. That argument is simply wrong.

To begin with, HB 1413, a “paycheck deception” measure was passed last year by the Republican-led Missouri Legislature and signed by former governor Eric Greitens, targeting public sector unions, initially took effect in August 2018 but was placed on hold pending the outcome of a lawsuit filed by several unions, including Local 148, challenging the constitutionality of the measure.

St. Louis County Judge Joseph Walsh III issued a temporary injunction on March 8, 2019 enjoining all defendants, including the MSBM and the Missouri Department of Labor “from administering or enforcing” any provision of HB 1413.

In his ruling, Walsh said the law would gut the state’s constitutionally guaranteed collective bargaining rules.

“A system like HB 1413 — in which very few conditions of employment are subject to meaningful bargaining, and the few conditions over which the parties can negotiate may be unilaterally abrogated by management — does not even give an illusion of collective bargaining,” Walsh ruled. Allowing the paycheck deception statute to continue being enforced, he continued, “threatens to void… representational status, jeopardizes long-standing contractual protections” and “destroys good faith bargaining.”

The case is set to go to trial later this year.

In the meantime, HB 1413 IS NOT IN EFFECT and cannot be used to require a new certification election, pending the outcome of the lawsuit.

Despite these facts, the County is apparently taking the position that because HB 1413 has not been permanently enjoined, that it is in fact law –– despite Judge Walsh’s ruling.