Home Opinions OPINION: Trump/GOP tax cuts are doing the opposite of what was promised

“A treasury secretary who can’t count needs to be held accountable.”

That was the message progressive advocacy group Americans for Tax Fairness (AFT) directed at Steve Mnuchin on Sept. 25, the two-year anniversary of the treasury secretary’s claim that the GOP’s 2017 tax cuts would slash the U.S. budget deficit “by a trillion dollars.”

AFT pointed out in a statement that the deficit has soared in the two years since passage of the tax legislation. CNN reported earlier last month that the deficit topped a trillion dollars during the first 11 months of fiscal year 2019.

“Mnuchin’s empty promise shows just how much the 2017 tax cuts for the rich were a scam on the American people,” said AFT executive director Frank Clemente. “Mnuchin’s prediction was off by $1 trillion.” 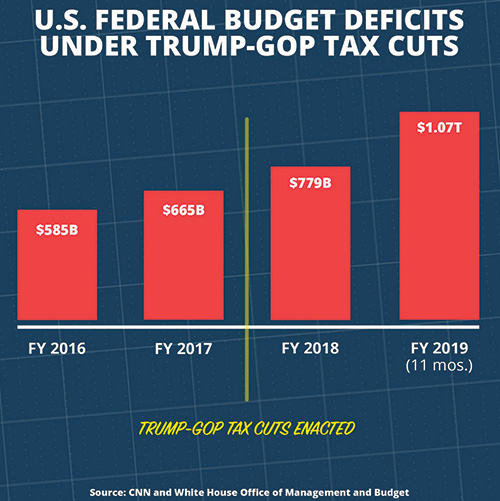 “That hasn’t happened either,” said AFT. “Annual gross domestic product was under three percent last year after passage of the tax cuts, and the latest third quarter results show GDP growth of two percent and a likely increase of 2.2 percent for the year.”

In May, as Common Dreams reported, a study by the nonpartisan Congressional Research Service (CRS) found the tax bill did virtually nothing to boost wages or GDP. However, CRS did find evidence that the tax cuts led to a surge in stock buybacks, which largely benefit rich executives.

EXCUSE FOR CUTTING MEDICARE, MEDICAID,SOCIAL SECURITY
According to AFT, Trump administration officials and their Republican allies are deliberately boosting the budget deficit to bolster their case for slashing safety net programs like Medicare, Medicaid, and Social Security.

“This was the bait-and-switch plan all along,” Clemente said. “Bust the budget with tax handouts to the rich and corporations, and then pay for them by cutting essential services to working families.”

(Jake Johnson is a staff writer for Common Dreams.)