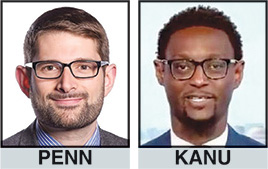 By BEN PENN and HASSAN A. KANU
Bloomberg Law

Eugene Scalia, a former Labor Department solicitor, has been a fixture in Labor policy circles thanks to his extensive private practice background litigating the same workplace issues that would be under his purview as secretary. That includes representing businesses in lawsuits challenging a few high-priority Obama-era Labor Department rules on conflicts of interest for retirement advisers and employee tip pooling.

Whether Scalia’s department expertise is a positive is a matter of perspective.

“I would never say he wasn’t qualified to be Labor secretary, he has knowledge of the area,” said Patricia Smith, who was solicitor of Labor under President Barack Obama.

Smith said his reputation as an “aggressive business lawyer” who represents prominent corporate clients in high-profile administrative law cases makes her nervous that with Scalia in place, worker advocates would have a tougher time in court blocking some of the agency’s pro-business deregulatory actions.

Former DOL officials who served with Scalia and have seen him rise to become a go-to attorney for corporations and trade groups say he respects the agency’s mission.

“Gene is not going to the Department of Labor to turn the lights off and close down the department,” said Paul DeCamp, a former DOL official in the George W. Bush administration who worked with Scalia at Gibson Dunn.

‘LESS TREPIDATIOUS’
Scalia’s intimacy with the department will have him well-equipped to handle tough confirmation hearing questions about his past legal work and how it relates to the DOL’s ongoing policies. With Democrats lacking the votes in the Republican-majority Senate to block his confirmation, Scalia’s likely arrival at the department is expected to lead to fast action on various regulations that are already under way, said sources who know him from his time at the DOL and as a partner at Gibson Dunn.

Scalia is expected to establish a more assertive style as that effort builds than the cautious leadership tone set by Alexander Acosta. Feeding those predictions is Scalia’s pairing with a deputy in Patrick Pizzella — who is acting secretary in the interim — with a hard-charging reputation.

“I think what you’ll see is a far less trepidatious DOL than we’ve seen in the last two years,” said Geoffrey Burr, a former DOL official under George W. Bush and at the Trump administration’s Transportation Department. “I think both Scalia and Pizzella are mainstream conservative, and when you look at things like regulatory reform, I think you’ll see considerably more action than you have.”

The department recently proposed three high-profile wage regulations, including rules to establish overtime pay eligibility and to narrow joint employer liability. Those rules, which are all labeled deregulatory, are desired by employers and Republicans, but they face potential lawsuits from Democrats or worker advocates seeking to knock them down so that a new president could easily repeal them in 2021.

Scalia is considered by some to be one of the nation’s most elite litigators, not just on Labor but also on administrative law. His arrival as Labor secretary would be a boon for a Trump administration hoping that its workplace law deregulation stands the test of time.

“Gene is very bright, very imaginative, and he has an enormous amount of familiarity with not only the substantive laws that the department enforces, but also the internal workings of the department — what the agencies are, how they go about doing what they do, and how the building ticks,” said DeCamp, who now represents businesses at Epstein Becker Green in Washington. “Because of that he will be able to hit the ground running and very quickly assess what is possible between now and January 2021, or January 2025 for that matter.”

The agency already has a robust regulatory agenda, meaning Scalia would need to quickly decide whether it’s worth his time to prioritize new rulemakings in the limited guaranteed time remaining that he would want to “go soup to nuts on,” DeCamp said.

But short of rules, a new Secretary Scalia would have an ability to advance policies that don’t require a lengthy public notice and comment process. For instance, businesses have been calling for more sub-regulatory guidance, such as enforcement agency opinion letters that would provide employers with clarity on various issues.

Other possible Scalia actions to put the administration’s policy orientation into effect, which largely haven’t been taken thus far under Acosta, could include revising provisions in agency handbooks and the investigatory instructions provided to field offices. Acosta’s deliberate, controversy-averse demeanor was criticized by some business groups and privately applauded by workers’ rights lawyers. Both sides have noted that the former secretary preserved many of the enforcement tactics taken by DOL offices across the country starting in earlier administrations.

As Labor secretary, Scalia would now be capable of implementing business-oriented changes through such processes to put a Trump stamp on investigation procedures.

NEW CLIENT: THE UNITED STATES?
His knowledge of the details from decades practicing in the labor space gives worker advocates such as Judy Conti “grave concerns” that he’ll be an effective implementer of the business community’s wish list. Conti, who is government affairs director for the National Employment Law Project, said, “He’s spent an entire career fighting for corporate power and against workers. We don’t see how he can be a champion of the nation’s workforce.”

Scalia has represented some of the largest businesses and corporate interests in the country.

He argued on behalf of the U.S. Chamber of Commerce and other industry groups to nix the DOL’s 2016 fiduciary rule, which would have required professional retirement investment advisers to act in the best interests of their clients. The rule became a moot issue when the Trump administration took a different position and stopped defending it.

He also defended the Wynn Las Vegas when casino dealers challenged the business’s practice of requiring tipped workers to share their tips with other employees, like kitchen staff. The dealers sued the casino under the 2011 “tip pool” rule, which was aimed at allowing certain categories of workers to keep the bulk of their tips. Scalia argued on the casino’s behalf—along with the National Restaurant Association—that the agency lacks authority to restrict the practice of tip pooling. The Labor Department under Trump also abandoned that rule.

Scalia was also on the pro-business side of a case against SeaWorld that’s become well-known for its compelling storyline and because of Supreme Court Justice Brett Kavanaugh’s dissenting from the 2014 majority opinion when he was on the U.S. Court of Appeals for the District of Columbia Circuit.

In the case, the theme park challenged a citation by the Occupational Safety and Health Administration for the death of an orca trainer who was pulled into a tank by a killer whale. Scalia and other SeaWorld attorneys argued that the worker safety agency didn’t prove the theme park recognized there was a likelihood of death or serious physical harm to the trainer or that there’s some feasible means of reducing such risk. The D.C. Circuit disagreed with those arguments and upheld the citation.

Those who served alongside Scalia at the Bush DOL and who have closely tracked his private sector career say Scalia will nonetheless be committed to the department’s mission of protecting workers’ welfare.

“He’s not representing clients at the department; he’s representing the United States,” said Chris Spear, CEO of the American Trucking Associations and a former DOL official when Scalia was solicitor. “I think when he takes that oath again, he’ll remain very true to that.”