Union vows to fight on; will appeal judge’s ruling

The May 29 ruling by the judge in the U.S. Bankruptcy Court of the Eastern District of Missouri in favor of proposals by Patriot Coal to eliminate its collective bargaining agreements and cut off retiree health care is “wrong, unfair and fails to fully recognize the coming wave of human suffering that will be experienced by thousands of people throughout the coalfields,” United Mine Workers of America (UMWA) International President Cecil E. Roberts said.

“As often happens under American bankruptcy law, the short-term interests of the company are valued more than the dedication and sacrifice of the workers, who actually produce the profits that make a company successful,” Roberts said.

U.S. Bankruptcy Judge Kathy Surratt-States gave Creve Coeur-based Patriot the green light to effectively eliminate the current system of health care for more than 23,000 retired miners and their families and make cuts in wages, benefits and working conditions for more than 1,700 active workers at Patriot.

Created by St. Louis-based Peabody Energy in 2007, Patriot Coal was spun off from the coal giant with 43 percent of Peabody’s liabilities but just 11 percent of its assets.

The UMWA says Patriot was created so Peabody could shed its health care and pension obligations to thousands of union retirees.

Creve Coeur-based Arch Coal did much the same thing when it created Magnum Coal in 2005. Patriot bought Magnum in 2008.

Patriot, which filed Chapter 11 bankruptcy protection in July, has said it needs $150 million in savings from the union to keep its doors open.

The judge’s ruling creates a path for Patriot to throw out its current collective bargaining agreements with the UMWA and implement substandard conditions of employment at its operations where the UMWA represents the workers – including cutting wages by several dollars per hour, taking thousands of dollars out of family incomes; eliminating paid time off by about one-third, with higher cuts for more senior employees; and drastically increasing out-of-pocket health care costs.

The ruling also allows Patriot to eliminate retiree health care for currently active employees, more than half of whom have worked long enough to be eligible for health care under the cancelled UMWA contract. Several hundred more are within 3 years of eligibility.

Under the Bankruptcy Court’s ruling, Patriot will be allowed to cease paying for retiree health care benefits as early as July 1. Responsibility for paying benefits would be handed over to a Voluntary Employee Beneficial Association (VEBA), which will only have guaranteed funding of $15 million plus a royalty payment of $0.20 per ton of coal the company produces, which may add approximately $5 million to the VEBA per year. Current health care costs for these retirees average nearly $7 million per month. 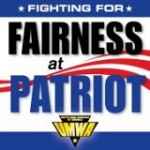 Patriot has offered the UMWA a 35 percent stake in the company, which could be sold to help fund the VEBA, in the event there is a willing buyer. Since the current and future value of the company is unknown, there is no way of knowing how much money this could provide for health care benefits or when such funding would be available. The company has also proposed a profit-sharing mechanism that would not provide any additional assistance to the VEBA until 2016 and even then would not provide more than about $2 million per year, at best.

“We will continue to meet with the company … to see if there is a way forward,” Roberts said, adding that the UMWA would appeal the bankruptcy court’s ruling to the U.S. District Court and continue its lawsuits against Peabody and Arch.

The UMWA has filed suit in Charleston, W. Va., alleging that Peabody and Arch violated the Employee Retirement Income Security Act (ERISA) by illegally dumping contractual obligations when they created Patriot and Magnum.

“We are going to continue to make every effort to secure adequate funding to meet the long-term health care needs of these retirees,” Roberts said. “Peabody and Arch can decide to live up to their obligations and end this problem tomorrow. But if they don’t, we will continue our litigation against them and are optimistic about our chances.”