Jefferson City – Missouri’s public sector workers didn’t ask for or support this legislative session’s so-called “paycheck protection” measure, so they were overjoyed when an attempt to override Gov. Jay Nixon’s veto of the bill failed.

The bipartisan vote was 22-10, one vote shy of the two-thirds majority needed for an override of what workers know to be paycheck deception.

House Bill 1891 would have required most public employee unions to acquire written permission from members annually before any union dues can be withheld from their paychecks to support their union. It exempted first responders, such as police and firefighters, but included unions representing teachers, social workers and most other state or local government employees.

The bill was straight out of the anti-worker American Legislative Exchange Council (ALEC) playbook.

‘THANK YOU’ TO SENATORS

“Thank you to the bipartisan group of senators who stood firm against the ALEC-inspired paycheck deception attack on workers’ rights,” said Alexandra Townsend, AFSCME Missouri Political Director. “Workers in Missouri’s veterans homes, our cities, parks, habilitation centers across the state, Fulton State Hospital, and many other facilities are focused on providing the highest quality services to citizens across the Show-Me State, and not once has any worker testified or supported this bill.” 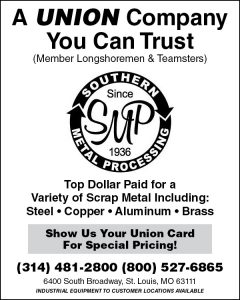 Democrats were joined by Republican Sens. Gary Romine of Farmington and Ryan Silvey of Kansas City in opposing the override.

“Workers have been meeting with her to address community concerns, and we look forward to continuing our dialogue and working together,” Leonard said.

Marcus Jones, a bus driver with North Kansas City Schools, said, “I know I and my coworkers are also looking forward to working with legislators from both parties in the future on finding solutions to the real problems facing public employees across Missouri, like low pay and the increasing turn-over rate in state jobs.”