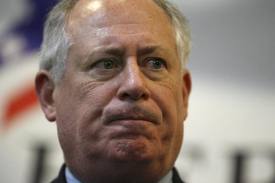 Quinn is trying to close state prisons and other facilities, reduce salaries and pensions and lay off workers in an effort to cope with the state’s looming multibillion dollar budget deficit.

His decision was the latest in a continuing struggle with AFSCME that began shortly after the Governor’s election in 2010. A contract with AFSCME has been extended several times this year after it ended last spring.

AFSCME issued a statement saying that Quinn’s action was “sure to deepen the frustration of the men and women who do the real work of state government.” The union said it now would be harder than ever to reach a fair contract.

The struggle between the union and Quinn could have implications for the Governor’s re-election in 2014. AFSCME was a major supporter of Quinn in 2010 and is one of the state’s largest unions with 40,000 members.

The fight could provide an opening for Republican candidates who could claim that Democrats and their union allies are too closely connected to solve the state’s budget problems and that a new political order is required to get the job done.