Home Labor News From Our Region Rally for Granite City Steelworkers will call for end to South Korean... 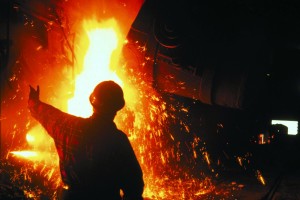 Granite City – Steelworkers are calling for community help at a public rally here on May 16 to demand government action to stop the dumping of South Korean steel pipe and tube.

“It’s time we told our government to stand up and do something about it,” said organizer Mike Mitchell, a long-time Steelworker from Gary, Ind., and now a representative for the Alliance for American Manufacturing. “This rally is to send that message.”

The event begins at 3 p.m. at the Town Square in downtown Granite City, just north of the U.S. Steel plant.

U.S. Steel testified recently in Congress that South Korea is using a network of related companies to evade U.S. trade laws, allowing them to dump pipe and tube products at costs below fair value. That threatens a huge amount of the business of domestic steelmakers. 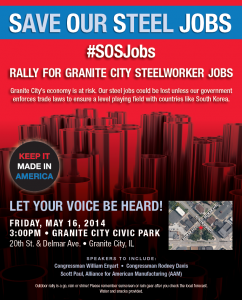 The U.S. International Trade Commission is now considering anti-dumping duties that may or may not exclude South Korea, which was excluded in a preliminary ruling by the Commerce Department. The next decision is due in July, Mitchell said.

“It affects the entire community,” Mitchell told the Greater Madison County Federation of Labor. He said at least four other American steel plants, in addition to Granite City, are being hurt by the dumping.

“It devastates the community, all the way down to the kids playing Little League baseball,” he said. “This is more than a labor event. This is a whole community event.”

Mitchell is asking all labor supporters in the area to come to the rally, which he hopes will get national news coverage.

Federation President B. Dean Webb said the group will help in any way it can. “It’s everybody’s issue,” he said. “We have to support our own people. We’ll try to get as many people there as we can.”