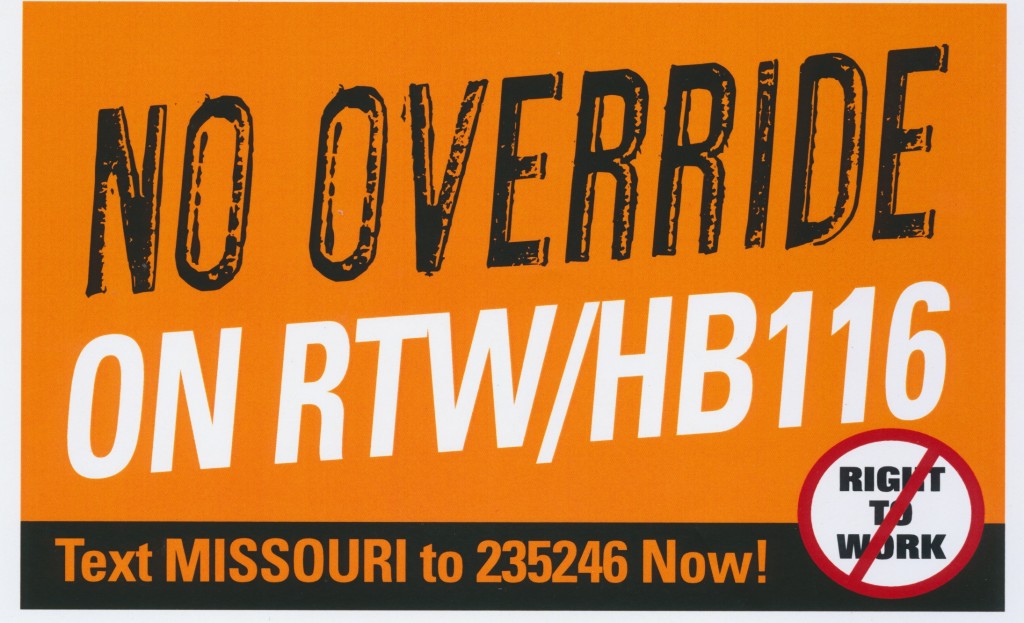 Union members will rally at the civic center then go door-to-door to talk with fellow union members about the dangers of right-to-work (RTW), asking them to write a note to their representatives urging them to oppose RTW and sustain the governor’s veto when the legislature reconvenes on Sept. 16 for a veto override session.

“Missouri Gov. Jay Nixon vetoed right-to-work last time it came up, but the forces behind right-to-work are now pressuring state legislators in an effort to get them to change their vote,” Missouri AFL-CIO President Mike Louis said. “If they succeed, it will make it easier for employers to deny workers their hard-earned pay.

“Despite enormous pressure and money from outside, right-wing, billionaire-funded organizations like the American Legislative Exchange Council and Americans for Prosperity, we were able to get our legislators to stand up together and reward work and to keep wages at a level that Missourians can sustain their families on, instead of passing blatant political attacks on working people,” Louis said.

“Now’s the time to show our legislators that when they stand with us, we’ll stand with them.”

Louis will be speaking at the rally. Other invited guests include:

The door-to-door visits from union members have been taking place throughout the state in anticipation of the Sept. 16 override session.

“We’re actually asking them right there to write a note to their representatives,” Missouri AFL-CIO Political Director Merri Berry said. “We just need them to write a short little paragraph saying ‘Thank you’ for voting no on RTW’ and ‘Please sustain the Governor’s veto on HB116.’ They fill out the postcards and we take them back and deliver them.” 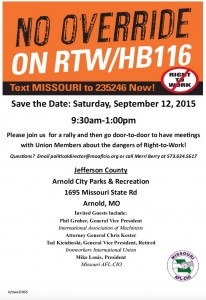 Berry said union members have been turning out in droves to deliver the message about RTW and encourage members to write a note to their representatives.

In fact, union member volunteers hit the streets in St. Charles last weekend to talk about right-to-work and encourage union members to write a note.

“It’s been a really fantastic turnout from our union members,” Berry said.

The state federation is also hosting a rally on Sept. 12 in the Kansas City area at the Kansas City Building Trades, 400 S. Main Street, Independence, MO. Invited guests for the K.C. rally include Gov. Nixon and Jake Hummel, secretary-treasurer of the Missouri AFL-CIO.

For more information on either rally, or to find out what else you can do to help defeat RTW, email: politicaldirector@moaflcio.org or call Merri Berry at 573-634-5617.